Audio Review: Angels in the City by Garrett Leigh, narrated by Dan Calley 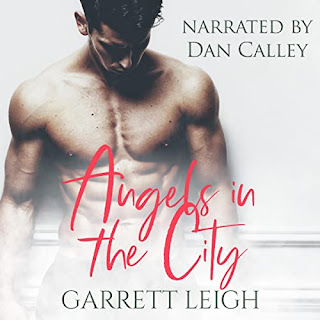 Note: The audiobook was provided by the author via Gay Romance Reviews Audio Team.
Angels in the City is the newest audiobook from Garrett Leigh, and she's once again tapped Dan Calley as her narrator. Full disclosure: I'm not a huge fan of the fake relationship trope. So naturally, there may have been a tinge of apprehension on my end when I saw that the main characters in this story play up being in a relationship even though they'd barely met while stuck in an elevator prior to one agreeing to attend a charity ball with the other. But this author has, more often than not, managed to suck me in with her writing, and she succeeds swimmingly with this! Add to that some impressive narration, and I was a happy camper, enjoying the heck out of this audiobook during the nearly six hours I spent listening to it.
Jonah Gray (26) and Sacha Ivanov (28) were a study in contrasts, yet theirs was a connection that was both irresistible and undeniable. Between the two, Sacha was the more complex man, what with his being rather more closed off, but it took someone like Jonah to slowly chip away at his proverbial defenses in order for listeners to see that there was more to him than meets the eye. There's romance and there's angst, and having read and listened to more than my share of Garrett Leigh-penned stories, I've come to expect quality writing in the implementation of the two elements. Dan Calley ably brings these two men to life, handling Sacha's Russian accent quite nicely. Angels in the City easily gets an overall rating of five stars.
Date Listened to: 02 December 2021
Learn more about Garrett Leigh.
Learn more about Dan Calley.
Purchase Angels in the City on Audible.