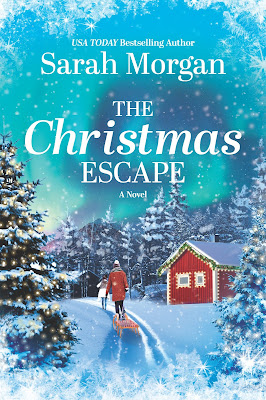 The Christmas Escape
by Sarah Morgan
Date Released: October 26, 2021
HQN Books
About The Christmas Escape
This Christmas, be whisked away by USA Today bestselling author Sarah Morgan in this uplifting novel of friendship, the festive season, and risking everything for the biggest gift of all...
Christy and Alix are forever-friends. Not even Alix's well-meant but badly-timed intervention the night before Christy's wedding has put a dent in their bond. There’s nothing Alix won’t do for the woman who helped fill the hole in her heart left by her own family's rejection. But taking Christy’s boisterous little daughter Holly on holiday to Lapland, days before Christmas, is a huge ask. Marketing whizz Alix might know how to turn toys into million-dollar Christmas bestsellers, but the responsibility of parenthood terrifies her. And unfortunately, she’ll have a witness to her ineptitude, in the annoyingly delicious shape of Zac, Holly’s father’s best friend, who will also be there...
Christy had hoped this year would be her dream Christmas, in her dream new family house. Instead, it's turning into the nightmare before Christmas, with a frightening list of household repairs, no money, and a make-or-break crisis in her marriage. Even worse, it's a crisis of her own making, and one that is on her shoulders to fix. With best friend Alix coming to the rescue and looking after Holly, Christy will finally have time to focus on rebuilding her relationship.
As Alix confronts her fears and finds unexpected romance under the Northern Lights, and Christy fights to save her marriage, could it be that their Christmas holiday opens their eyes, and their hearts, to what they’ve always wanted?

USA Today bestselling author Sarah Morgan writes contemporary romance and women's fiction. Her trademark humour and warmth have gained her fans across the globe and three RITA® Awards from the Romance Writers of America.
Sarah lives with her family near London, England, where the rain frequently keeps her trapped in her office.
Connect with Sarah
Website | Facebook | Twitter | Instagram | Goodreads