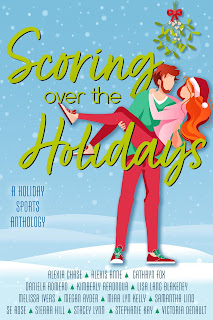 Note: An advance reader copy (ARC) was provided by the authors.
Scoring Over the Holidays is a holiday romance anthology featuring short stories from fifteen authors known for their sports romances. For this review, I'm covering the seven stories I was able to read: Secret Santa Face-Off by Victoria Denault, All In by Cathryn Fox, Dirty Christmas by Mira Lyn Kelly, Holiday Hat Trick by Samantha Lind, Final Shot by Stacey Lynn, A Forward Holiday by SE Rose, and Holiday Heat by Megan Ryder. When my schedule (hopefully!) eases up (December is always busy, but it's been busier than I thought possible this year!), I'll add on to this review once I get the chance to go through the eight other short stories.
Out of the seven I read, Victoria Denault's Secret Santa Face-Off and Mira Lyn Kelly's Dirty Christmas were my favorites, earning 4.5 stars for the former and five stars for the latter. Denault's story had some serious enemies-to-lovers vibes and the whole one-up-manship between hockey player Nolan and event coordinator Felicity, both of whom are part of the Chicago Comets organization. On the other hand, Kelly's story was sweet and fun-filled, courtesy of main characters Noel, a defenseman with the Chicago Slayers, and Misty, sister of Stormy (yes, Diesel's Stormy). These two fab stories made me laugh and left me smiling.
Holiday Hat Trick by Samantha Lind and A Forward Holiday by SE Rose both get four stars. Lind's story was a college romance between hockey player Jason and reporter Olivia, both of whom were seniors. This was cute and was fast-paced. With Rose's story, it takes Ivy, an American, to Stafford, England for two weeks, which is where she meets footballer Brodric, currently down with an injury. These two characters were interesting and I liked that they met each other at just the right time. Both stories had happy-for-now endings, and at times, skipped over the actual "journey" part of their relationship, but I guess that was due to keeping things short.
Stacey Lynn's Final Shot is a prequel to Game Changer, which is the author's Las Vegas Vipers series starter. If you've read the blurb for the full-length book, then you pretty much know what the immediate events were after everything that happens in this short. I wasn't a huge fan of Lizzie's and my heart broke for Garrett, a hockey player who'd been traded from Chicago to Vegas. This one gets four stars, just like Megan Ryder's Holiday Heat, which had the whole fake relationship trope going. I liked Lucy, but while Alex was generally a good guy, I didn't get why he couldn't say "no" to his ex and I wanted to smack him upside the head at times.
Last but not the least is All In by Cathryn Fox. This had a mix of enemies-to-lovers (although it was more of the heroine hating the hero rather than actual mutual hate or dislike) with some second-chance feels (or more like the hero tries to make amends for his bone-headed moves back in college). Peyton hasn't quite forgotten or forgiven Caleb for his rejection of her when they were in college, so when they attend the wedding of their close friends, things are a wee bit tense and awkward. I appreciated the story and I liked the characters, but I think the ending was a tad rushed, but hey, everything ends happily. This one gets 3.5 stars.
Release Date: 06 December 2021
Date Read: 22 November 2021
Learn more about Alexis Anne, Lisa Lang Blakeney, Alexia Chase, Victoria Denault, Cathryn Fox, Sierra Hill, Melissa Ivers, Stephanie Kay, Mira Lynn Kelly, Samantha Lind, Stacey Lynn, Kimberly Readnour, Daniela Romero, SE Rose, and Megan Ryder.
Purchase Scoring Over the Holidays on Amazon | Apple Books | B&N | Kobo.