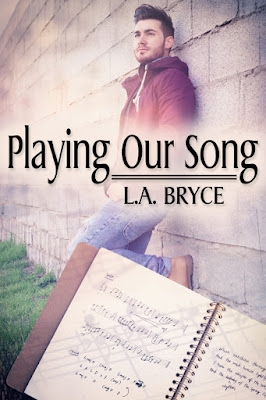 Playing Our Song
by L.A. Bryce
Date Released: November 27, 2021
JMS Books
About Playing Our Song
Jase is famous around the world, and Garrett’s well known in his neighborhood. They’re two singers. One is living his dream, and the other is living his brother’s.
Jase’s boyfriend’s hostility has increased toward Jase, making their relationship toxic, but too focused on his band, Jase lets it slide, causing Jase to almost miss out on the kind of love that lived in his fantasies.
Garrett made a promise to his brother when he passed. But a mistake in its interpretation almost causes Garrett to live out his brother’s dream instead of reaching for his own.
Can these men spot and remove the obstacles stopping them from making beautiful music together before it’s too late? 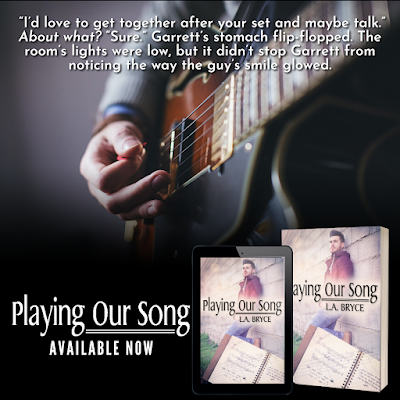 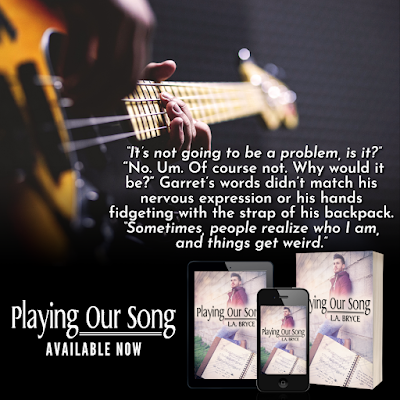 An Excerpt from Playing Our Song
Jase moved. Then he continued to cruise, circling the airport. He wasn’t sure who grew more annoyed; him from the monotony of driving in circles, or the officers who moved toward his car every time he came around the circle only to realize it was Jase again.
After about the tenth ring around the airport, Jase tried to call Andrew. The call went right to voicemail. He continued to make the loop another five times and called again. After another five times, he suffered the same outcome with the call. Andrew must have turned his phone off.
Instead of heading back to the pickup area on his next loop, Jase turned onto the ramp that led to the parking garage. As he stepped out of the car, his stomach growled, reminding him he’d never ordered food when he stopped earlier.
Inside the terminal, Jase bypassed the seating area and headed straight toward the kiosk to grab a snack. While waiting for his food, his thoughts traveled back to the restaurant and the reason he hadn’t had time to order anything. He had been too busy listening to the guy sing. Genuinely impressed, Jase’s thoughts remained on the guy’s voice and the song Jase had never heard before as he finished eating and moved to sit between the exit and baggage claim. He sat for a while before he noticed his boyfriend coming down the escalator.
Jase stood and waved. It stunned him to see Andrew’s smile turn into a sneer when he spotted Jase. Jase ignored it. He figured it had more to do with Andrew being late than anything else.
“Hey, baby, I’m so glad you’re back. I missed you,” Jase said as he moved in to kiss Andrew.
Andrew moved and landed Jase’s kiss onto his cheek instead of the lips where Jase was aiming.
“What happened to the car?” Andrew spoke in a yelling whisper. “Why are you in here?” Andrew’s stiff posture and downturned lips surprised Jase.
“Because you’re late.” Jase didn’t understand what the problem was.
“No, I’m not. They expected to land at nine-forty-five, and it’s exactly nine-fifty.”
Jase blinked, confused. “You told me you planned to land early. At eight.”
“Yeah,” Andrew scuffed. “That didn’t work out. After the pilot mentioned we were running early, he told us it wouldn’t matter because of the air traffic. The plane wasn’t able to land until its allowed spot. Which it did.”
“You didn’t think to call me and tell me this,” Jase said. Still confused, his words came out sounding harsher than he intended.
“I did, but my phone died.” Andrew pulled out his phone as if to show Jase. It was dead. “What could I do, you were already on your way?”
“I’m sure someone had a phone for you to borrow, so I wouldn’t have to wait here for over an hour.” Jase couldn’t believe he even had to say this.
Andrew snorted as he stopped walking. He turned to face Jase, Andrew’s nostrils flared, and his eyes squinted. The back of Jase’s throat burned. He’d fucked up.
Jase went to apologize, for what he wasn’t sure, but Andrew held up his hand, stopping Jase.
“I’m sorry if coming to get me was such an inconvenience.” Andrew spit out the words.
Jase shook his head. “That’s not what I said. Not what I meant. I just—” He tried to apologize again, but Andrew cut Jase off for a second time.
v“Next time, I’ll just make sure I arrange for a car to pick me up,” Andrew said and walked away.
Jase stood shocked, trying to figure out what the hell just happened. Then his brain caught up with what was going on, and he ran to catch up with Andrew. Shit. “That’s not necessary.”
Andrew stopped short, and Jase almost crashed into him.
“I could probably arrange for one right now.” Andrew pulled his phone from his pocket. “I’ll just call Renaldo, and he’ll send a car to come for me.”
“How do you plan to call? Your phone’s dead.” The words fell from Jase’s mouth too fast to stop, and he knew, beyond a doubt, that he’d just fucked up. Again. His stomach dropped. 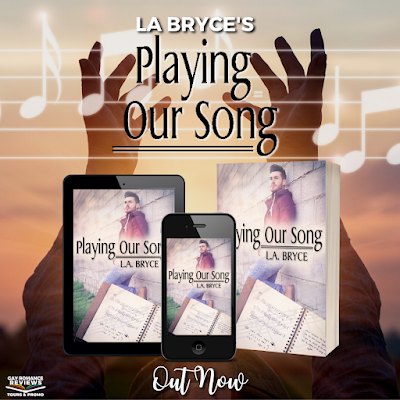 L.A. Bryce is a contemporary M/M romance author who loves her men to work hard, play hard, and love hard.
She’s always lived in the northeast and has recently stretched her boundaries and moved farther north—the more relaxed lifestyle giving her more time to write—in theory anyway.
Among the things she loves besides writing and her family are her friends, those she writes with and those she writes about, reading, games (the kind with boards, not in love), her dogs, Nutella and Bok Choy, and the men and women from the military, past and present, who keep us safe.
When she finds herself stuck at the keyboard, her fingers refusing to move, her characters refusing to talk, she likes to take a break, blast some music, and dance like no one is watching her or sing her heart out into her hairbrush microphone.
She’s living her happily ever after and wants the same for all her characters. L.A. believes love comes in all different packages and each should be wrapped in a ribbon and cherished.
Connect with L.A. Bryce
Website | Facebook | Twitter | Instagram | Pinterest | Goodreads 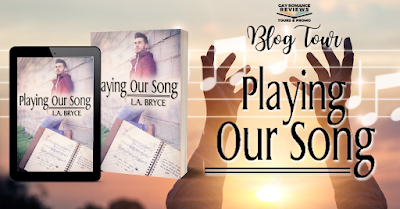