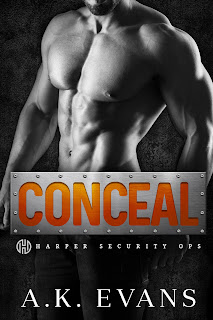 Note: An advance reader copy (ARC) was provided by the author via Give Me Books Promotions.
Conceal is the third book in the Harper Security Ops romantic suspense series from A.K. Evans. This time around, the guys have got a celebrity client on their hands. Liliana Mack, aka Lily Mack, has dedicated the past seven years to her career, but being in the limelight isn't all it's cracked up to be. Taking time off from the trappings of Hollywood, Liliana decides to return to her hometown, not knowing danger was waiting for her. With Jagger Lowe being Harper Security Ops lead bodyguard, the job of watching over Liliana should be textbook. But nothing could have prepared him for the impact being around her would have on him. He's always prided himself on being professional, yet Liliana is a temptation that his heart struggles to resist. The deeper Jagger and Liliana fall for each other, however, the more potent and persistent the threat becomes. Will Jagger be able to ensure Liliana's safety and identify and neutralize the threat or is he now compromised?
A.K. Evans's Harper Security Ops series continues to be entertaining! This third book brings the romance and suspense, and I liked that it was a bit different, taking on a celebrity as one of the main characters this time around. I liked both Liliana and Jagger. They had some awesome chemistry going on, and Jagger being caught between keeping things professional but wanting to be way more personal with Liliana was part and parcel of what made this a good read. As to the mystery of who was after her, the person I suspected turned out to be right one. Overall, Conceal was a consistent four-starred read.
Release Date: 19 July 2022
Date Read: 18 July 2022
Learn more about A.K. Evans.
Pre-order Conceal on Amazon | Apple Books | B&N | Kobo.