Review: Loner by Ginger Scott (The Boys of Welles #1) 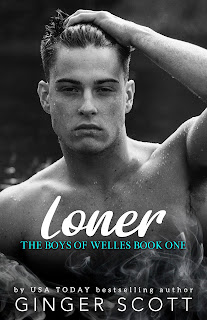 Note: An advance reader copy (ARC) was provided by the author via Wordsmith Publicity.
Ginger Scott has a new mature young adult series, and she's kicking The Boys of Welles off with a moving story about love, grief, and friendship. Set in the fictional campus of Welles Academy, a private school in Ashwood, Massachusetts, Loner is the story of Lily Beachem and Theodore Rothschild, both eighteen and in their final year before heading off to college. Theo's twin sister, Anika, just happens to be Lily's closest friend at Welles, and while she's the tie that binds them together, when Theo and Lily get the opportunity to hang out during a bonfire, there's a connection between them that both seem to be eager to explore. Then tragedy strikes, leaving many, especially Lily and Theo adrift. They struggle to move forward. Life as they knew it has become all the more difficult, and guilt and anger threaten to drown them. Could their connection still exist and help them heal?
Loner is the ideal series starter, offering up a standalone story about one couple while also giving glimpses of possible pairings going forward. I felt for both Lily and Theo. These two were mired in grief and guilt, and being around each other hurt, but you could see that if they gave themselves the opportunity, their connection may be the salve to begin the healing process. The added layer of complicated familial ties brought more interest, although I do wish that Lily's was delved into a wee bit more. That being said, I loved Lily and Theo and how they managed to find some firmer footing in the relationship they were trying to build. Not everything was smooth sailing, and they were certainly a work in progress, but I liked that they weren't perfect while still doing their best to better. This first Boys of Welles book gets 4.5 stars, and I can't wait for the next one.
Date Read: 06 July 2022
Learn more about Ginger Scott.
Purchase Loner on Amazon.