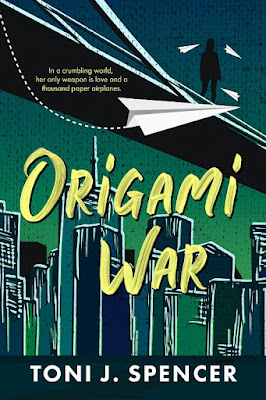 Origami War
by Toni J. Spencer
Date Released: July 19, 2022
NineStar Press
About Origami War
Haunted by her mother’s death, sixteen-year-old Penny sleepwalks by night. By day, she peddles bootleg vodka to rich kids looking for kicks on the wrong side of Brooklyn Bridge, a place reeling in total economic meltdown, strict curfew laws, and violent disarray.
Penny’s chance meeting with Quinn, a rabble-rouser dabbling in counterculture graffiti, sets in motion a deep love affair and the start of a seemingly impossible revolution. Inspired by a childhood memory, the two of them craft powerful messages hidden in the folds of hundreds of paper airplanes. They plan to launch them from the rooftops of derelict buildings even as the unforgiving militia hunts them from below.
Will hope take flight in a crumbling world, or will their efforts devastate them all? 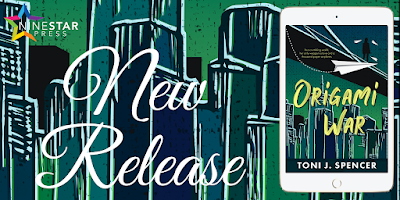 About Toni J. Spencer
Toni J. Spencer is an avid daydreamer and eternal optimist. When she’s not encouraging her two children to jump on the couch, eat with their fingers, or understand the power of using swear words in context, she writes. Toni has several award-winning short stories under her belt, and once the procrastinating is done and dusted, plans to turn most of them into novels.
Despite calling New Zealand home, Toni considers herself a citizen of the world and dreams about the day when she can once again stuff her backpack full of short-shorts and furry jackets and head out in search of adventure and friends unmet.
Origami War is Toni’s first published novel and was mostly written in the witching hour during a serious bout of insomnia. She figures she’ll have plenty of time to sleep when she is dead.
Connect with Toni
Facebook | Instagram | TikTok | Goodreads