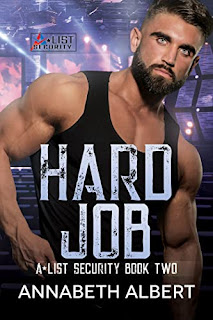 Note: An advance reader copy  (ARC) was provided by the author.
Providing security for anyone is difficult enough, but add on a layer of fame, and things are bound to become even more complicated. That's what happens when thirty-something Duncan Lubov is coerced by his younger brother to take on the task of becoming his best friend's bodyguard while on tour. That best friend is none other than Ezra Moon, the twenty-eight-year-old former teenybopper television star turned superstar musician and performer and leader of renowned rock band We Wear Crowns. Duncan recognizes this as the perfect opportunity for A-List Security to garner more attention and bring in more clients, but he isn't sure he's the best man to guard Ezra. The thing is, he's the only one that Ezra wants for the job, and with Ezra's years-long crush on his best friend's brother plus Duncan's own covert feelings, it's looking like one hard job.
While Duncan and Ezra's romance uses the falling-for-my-brother's-best-friend trope just like Cash and Danny's, this had a somewhat different feel to it. Maybe it was the fact that Duncan was Ezra's longtime crush from his teenage years or that Duncan was a closet We Wear Crowns fan, but their story was the awesome mix of sweet and steamy plus all that secrecy as to the status of their relationship, no thanks to their hesitation to letting anyone know, i.e. Danny, the rest of A-List Security, the band, and the record label. These main characters were such opposites--from personality to family background and so on--but I loved seeing Duncan loosen up and relish in the moments he had, not just with Ezra, but with Danny as well. Hard Job was a great read that endeared Duncan and Ezra to me, so awarding it 4.5 stars is no hardship on my part.
-------------------------
Read my reviews for the A-List Security series: