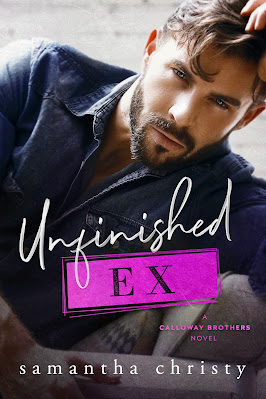 Unfinished Ex
(Calloway Brothers #2)
by Samantha Christy
Release Date: July 30, 2022
About Unfinished Ex
He was my high school sweetheart.
My dream guy. My soul mate.
And as of yesterday... my ex-husband.
He wanted everything I couldn't give him. A doting wife, a perfect family, a white picket fence, and game nights.
It's not that I didn't want to be his wife anymore. I just wanted something more—a career. So when an opportunity came up two years ago, it was easier to make him hate me than have him think he wasn't enough.
Now, a day after our divorce is final, I find myself thrust back in the town we grew up in, down the street from the house we once owned together..
Seeing him again has me second-guessing everything. My priorities. My reason for leaving. My secrets.
When we cave, and have one explosive night of ex sex, everything changes.
Or nothing has.
And I have to decide if history is about to be repeated. 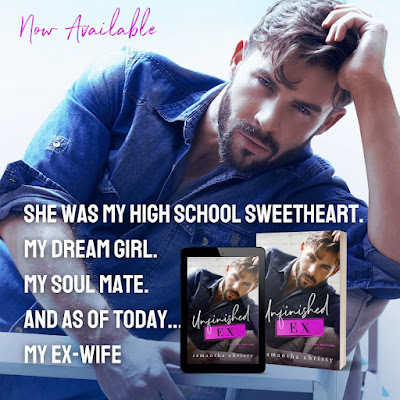 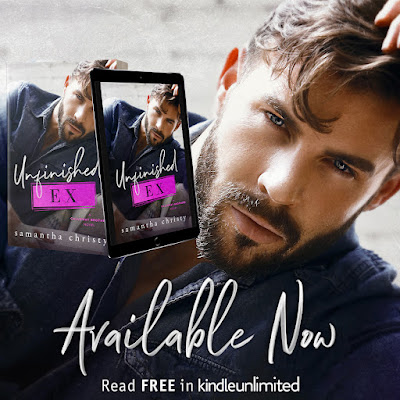 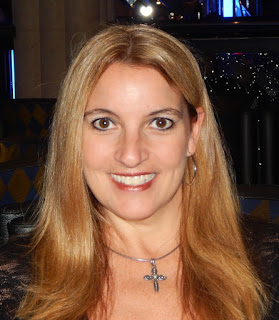 Samantha Christy’s passion for writing started long before her first novel was published. Graduating from the University of Nebraska with a degree in Criminal Justice, she held the title of Computer Systems Analyst for The Supreme Court of Wisconsin and several major universities around the United States. Raised mainly in Indianapolis, but also living in Lincoln, NE for a time, she decided to devote herself to family upon the birth of her third child and became a stay-at-home mom. It was then when the writing bug really took hold as she was a voracious reader. Being a stay-at-home mom facilitated her ability to follow her dream of becoming an author.
When she is not writing, she keeps busy cruising to every Caribbean island ships sail to. Samantha Christy currently resides near St. Augustine, Florida with her husband and the two of her four children who haven’t flown the nest. Oh, and her dog, Ozzy, who she worships and thinks is the most adorable Whoodle on the planet.
Connect with Samantha
Website | Facebook | Twitter | Instagram | Goodreads | BookBub | BingeBooks | Amazon