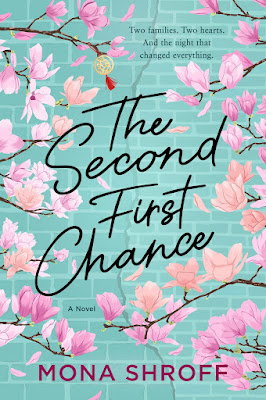 The Second First Chance
by Mona Shroff
Release Date: August 2, 2022
HQN Books
About The Second First Chance
For fans of Katherine Center's Things You Save in a Fire and Jill Santopolo's The Light We Lose, The Second First Chance is a deeply emotional romance about two neighboring families, the Voras and the Desais, who experience a devastating fire and the fallout it creates in their lives—particularly for Dhillon Vora and Riya Desai, who struggle to admit their feelings for one another.
On one terrible night, everything changed.
Riya Desai has struggled to move beyond the devastating fire that claimed the life of her brother, Samir, and set her on a path she never anticipated. Determined to keep other families from experiencing the loss that hers did, she's become a firefighter herself, but it hasn't been an easy road. The other firefighters are her fire hall are overwhelmingly white—and entirely male. As a rookie and as the only woman at the station, she has to keep proving herself, over and over, in a way her male colleagues never have to. Oh, and her other problem? Her family thinks she's a paramedic—they have no idea she's a firefighter, and she knows they won't be happy about her running into fires instead of away from them.
Dhillon Vora is a healer. After the fire that killed his father, he becomes a vet, his faithful dog Lucky—who survived the fire at the Voras' and Desais' townhouses—behind his side. On a visit to the fire hall across from his clinic, he is dumbfounded to find the girl next door, Riya Desai. Riya has become a firefighter? Dhillon is livid. And—though he can't really admit it—kind of impressed. Even though he knows, deep down, that he's never stopped loving Riya, he isn't sure he's ready to have her in his life again. Especially if he has to worry constantly about her safety.
The Second First Chance is not only a deeply moving tale of two people learning to love each other again, but an uplifting story of two families overcoming tragedy with hope, love, and the unbreakable bonds that keep us shining together even through our darkest hours.

Mona Shroff is obsessed with everything romantic, so she writes romantic stories by night, even though she's an optometrist by day. If she's not writing, she's making chocolate truffles, riding her bike, or reading, and is just as likely to be drinking wine or gin & tonic with friends and family. She's blessed with an amazing daughter and loving son who have both gone to college.
Mona lives in Maryland with her romance-loving husband.
Connect with Mona
Website | Facebook | Twitter | Instagram | Goodreads