Review: The Scandal by Kristen Proby (Single in Seattle #2) 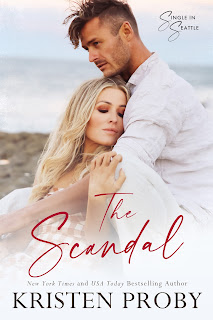 Note: An advance reader copy (ARC) was provided by the author via Valentine PR.
The Scandal is the second book in the Single in Seattle series from Kristen Proby and features Stella McKenna, daughter of Nate and Jules McKenna (Fight with Me, book two in the With Me in Seattle series). When she learns that she accidentally married one of her closest friends during a drunken evening in Vegas, getting an annulment is a must considering her friend was already engaged to someone else. She reaches out to Grayson Sterling, a lawyer who came highly recommended. She was expecting someone elderly, but it turns out that not only is he only thirty-four to her twenty-five, he was gorgeous, sexy, and intelligent. Trusting him with her body and her heart was natural, but when he does breaks that trust, Stella doubts if Gray will ever find a way to repair what they have.
Stella and Gray had huge shoes to fill considering the fact that I seriously liked Jules and Nate from Fight with Me. Luckily, these main characters in this spin-off were just as interesting as their predecessors. Stella and Gray certainly had that connection from the get-go, and everything that happened with as far as their romance went was quick, as one would expect when it comes to insta-love stories. There's drama courtesy of something Gray does and Stella's reaction to it, but a happily-ever-after is pretty much a guaranteed thing. I will say, though, that while the official blurb for this book states that it's a marriage of convenience romance, the only marriage that happens is the one between Stella and her friend, Danny, and that turned out to be more of an inconvenience. So, if you're a reader of that particular trope, just a heads-up. I'm giving The Scandal four stars.
Release Date: 12 July 2022
Date Read: 07 July 2022
Learn more about Kristen Proby.
Pre-order The Scandal on Amazon | Apple Books | B&N | Kobo.