Review: The Crush by Karla Sorensen (The Wolves #3) 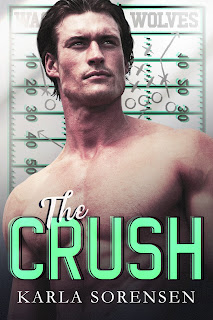 Note: An advance reader copy (ARC) was provided by the author via Wildfire Marketing.
Is it possible for the person you once had an intense crush on to turn out to be the one that got away? This realization hit superstar quarterback Emmett Ward after a terrible incident on the field. It's been about five years since he last saw Adaline Wilder, and it was the night she had confessed her feelings for him, hoping that he felt the same and would make a go of a relationship. But he went on to break her heart, telling her he wouldn't have the time to pursue anything with her. He was twenty-one and on the cusp of beginning his career as a professional football player. He's achieved a great deal of success since then, but now, he can't help but take stock of his life and recognize what was missing. Emmett knows that convincing Adaline to give him another chance is easier said than done, but the connection between them has him prepared to go all in this time.
If you're a longtime Karla Sorensen reader, then both Emmett Ward and Adaline Wilder should be more than familiar characters. He's the son of Logan and Paige Ward (The Marriage Effect, book three in the Washington Wolves series), and she was personal assistant to Molly Ward (now Griffin from Focused, book one in the Ward Sisters series). I've been so eager to get my hands on their book ever since Sorensen announced that it was in the works. I appreciated that the story truly focused on their journey towards a potential happily-ever-after. There were hurdles and trials along the way, but I was really happy that there wasn't any sort of unnecessary drama in the form of vindictive exes and the like. The romance was there, as was the football, but let's not forget that this was also about family, and I enjoyed all of the cameos. Giving The Crush five stars is a no-brainer.
-------------------------
Read my reviews for the Wolves series: