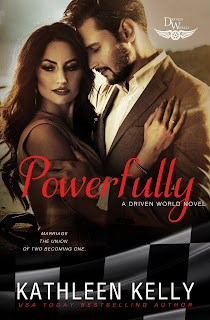 Note: An advance reader copy (ARC) was provided by the publisher.
Kathleen Kelly was a new-to-me author when I read Powerful back in December of 2020, and that second-chance romance had me sitting up and taking notice. It still remains my favorite among all the releases that I had the opportunity to peruse in K. Bromberg's multi-authored Driven World book universe. There were unresolved issues in that book, and I've been eagerly awaiting the conclusion to Athena Boswell and Kris Livingston's story. After a year and a half, we've finally got the sequel, and Powerfully brings with it romance and suspense. Just a quick reminder: you do need to read the books, Powerful and Powerfully, both available now, in order so as to fully understand and appreciate everything Athena and Kris went through as a couple.
This book more or less picks up where its predecessor left off, and suffice it to say that I had high expectations considering how much I loved book one. Athena is keeping one heck of a secret from Kris, and it's one of those secrets should have been divulged early on considering the impact it could have on both of them. So yeah, not a fan of how long Athena stayed mum and how Kris was NOT the first one she told. Still, I adored these two and their love is tried and true. The supporting characters were notable, particularly Todd, who definitely deserves the title of "bestie". While I did enjoy this sequel, I must confess that I didn't have the same impact, flow, and cohesiveness that the first book had. All things considered, four stars for Powerfully .
Release Date: 07 July 2022
Date Read: 06 July 2022
Learn more about Kathleen Kelly.
Pre-order Powerfully on Amazon.