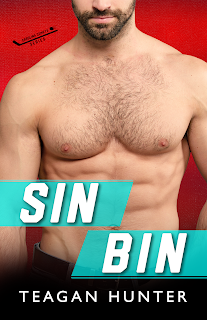 Note: An advance reader copy (ARC) was provided by the author via Valentine PR.

"I know what I said, and I fucking lied." She gulps at the harshness of my words. "Do you really think I could just forget our weekend together? Do you really think there is any possible way I can look back on that and think it was just sex? After knowing wht you feel like..." She sucks in a sharp breath. "Taste like...it's impossible."

Owen Smith is my MVP! Yep, I've just found my favorite book in the Carolina Comets series, and it has everything to do with this fictional professional hockey team's veteran centerman. Okay, okay, I'm not being fair to Emilia Anderson, especially since she was a rather awesome female main character. After all, Owen without Emilia and vice-versa would have been unfathomable, and these two were truly perfect for each other. Sin Bin is their story, and while this fourth Carolina Comets novel may be read as a standalone and does work well enough without any prior reading required, there are recurring characters and certain details regarding their respective stories may turn out to be potential spoilers if you're new to either the series itself or to Teagen Hunter's writing.
Sin Bin is, simply enough, sinfully scintillating! This is a hockey romance with some age-gap feels plus a touch of the forbidden since there's a rule that the Carolina Comets' regular employees were prohibited from any sort of romantic relationship with hockey players. Owen Smith is thirty-eight and a centerman for the Comets, while Emilia Anderson is twenty-eight and the team's social media manager. Add to that the fact that she just happens to be the head coach's niece. It doesn't matter that what they shared together one weekend a couple of years ago has stayed with them all this time. There can be absolutely no fraternization between, especially not with Emilia up for the promotion she's been hoping for; not with Owen focused on winning one more championship before he finally decides to hang up his skates. But it looks like the rules are about to be broken.
I enjoyed the heck out of this book. I loved the idea of Owen (yeah, I'm choosing to call him by his first name and not his last name, and I'm definitely not calling him "Apple") being the true veteran on the team, playing only for the Comets. The guy's first and only love was hockey; well, that was before Emilia came along, and these two became each other's game changer, but it took some time for them to realize that. They tried the darnedest to maintain some distance, but resistance was futile. Yes, there was that weekend-long hook-up, but everything that followed was pretty much a slow burn type of deal, and I think it was better that way. I appreciated how supportive they were of one another, and same goes with the team and those nearest and dearest to them. I adored the ending, but I'm also giddy with anticipation for Miller's story, which is up next. Dare I hope for one for Greer, too? All my fingers and toes crossed! Five-plus stars go to Sin Bin!
------------------------
Read my reviews for the Carolina Comets series: