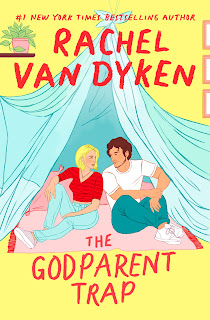 Note: An advance reader copy (ARC) was provided by the Forever (Grand Central Publishing).
The Godparent Trap is the newest standalone from Rachel Van Dyken, and it's a traditionally published novel via Forever, which is one of Grand Central Publishing's imprints. Now, before you go thinking this story has a couple of sneaky twins swapping places in hopes of getting their erstwhile parents back together ala The Parent Trap starring Hayley Mills, which is a personal favorite film from my childhood, Van Dyken's book is nothing like it. Here we've got Rip Edison and Colby Summers. He owns an accounting firm and she's a food blogger, and they can't stand each other. But Rip's sister, Monica, is Colby's best friend, and Colby happens to be close to Monica's husband, Brooks, who just happens to be Rip's best friend, so it's not as if Rip and Colby can avoid one another. When a devastating accident kills Monica and Brooks, Rip and Colby find themselves co-guardians to Ben and Viera Jones. Learning how to parent is difficult enough, especially for two single people who didn't have kids, but what more with two opposites who've never really gotten along?
While the cover of this book may make you think it's purely lighthearted fare, Rachel Van Dyken does tackle some rather heavy topics, particularly death (i.e. of parents, best friends, a sibling) and grief. There were definitely heartrending moments between the covers, especially when the kids, Ben and Viera, asked for the mom and dad and when Rip and Colby were caught between suddenly having two children to care for while also struggling with how to mourn the loss of Monica and Brooks. All that being said, there are undoubtedly countless lighter times for this sudden family and for our main characters on their own and as partners. A standout supporting character was Banks, Rip's close friend and fellow accountant. The guy was easily likable, and he brought a great deal of levity and logic to the story, albeit I wasn't too sure how I felt about who he ended up with considering what she did in the book. That aside, The Godparent Trap was an ultimately heartwarming read that left me with a very satisfied smile on my face. This one receives four stars.
Release Date: 19 July 2022
Date Read: 17 July 2022
Learn more about Rachel Van Dyken.
Pre-order The Godparent Trap on Forever | Amazon | Apple Books | B&N | Kobo.