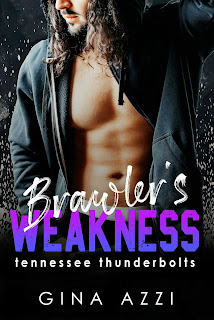 Note: An advance reader copy (ARC) was provided by the author via Give Me Books Promotions.
Brawler's Weakness is the second book in the Tennessee Thunderbolts hockey romance series from Gina Azzi. This single-parent romance features Axel "Brawler" Daire and Maisy Stratford. Axel's thirty-six, a veteran hockey defenseman, and a single father to a twenty-one-year-old daughter, Lola. On the other hand, Maisy's twenty-eight, loves baking, and a new member of the Bolts' human resources department. After a muffin mishap and breakup via text on her very first day at The Honeycomb, it's Axel who rescues her. They've known each other for some time, thanks in large part to Axel's teammate and Maisy's best friend being a couple, but while Axel has noticed her from the get-go, he never pursued her, not with her being in a relationship. Now she's single, but he hasn't dated in two decades and he refuses to be nothing more than a rebound. Add to that he's grumpy and she's all sunshiny goodness. Maisy's his weakness...and his strength.
The single parent trope is one of my top favorites when it comes to romance, and when you put together with hockey, well, it's like a double dose of anticipation. One of my favorite things about what Gina Azzi did in this second Tennessee Thunderbolts novel is that Axel's daughter was a full-fledged adult, and not the usual preschooler or younger or a bit older. (Side note: I think there was a mix-up when it came to the ages--Axel is thirty-six and he says he became a father at sixteen but then Lola is twenty-one...you do the math!) I liked how Lola encouraged her dad to go out of his comfort zone and be the best version of himself as a guy and not just as a father. Then there's Maisy, who I quite adored. She truly did come into her own, and she gained more self-confidence and I applaud her realization that she deserved better. Brawler's Weakness was a fairly lighthearted romance with a pinch of angst, and I enjoyed every bit of it. It gets 4.5 stars.
-------------------------
Read my reviews for the Tennessee Thunderbolts series: