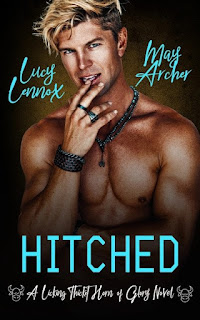 Note: An advance reader copy (ARC) was provided by the authors.
And things have gone from good to great in the Licking Thicket: Horn of Glory series from the writing duo of Lucy Lennox and May Archer! This time around, we've got Percival Champion (aka Percy or Champ and former Marine who now owns Champion Security) and Quinn Taffet (aka...well...Quinn and owner of Taffet Events) for our main characters, and Hitched is their fake relationship story. Or maybe not as fake as they thought, after all, Champ and Quinn have been regularly hooking up for almost a month. And even though Champ has repeatedly told Quinn that he isn't interested in anything serious with him, he can't seem to help himself. He needs to stay focused on making his private security business a success, and Quinn is a complication he cannot afford to indulge in. But when he ends up declaring Quinn his (fake) fiancé in order to go undercover and gain access to a rare Horn of Glory (HOG) game console an retrieve sensitive data, it seems that things have become even more complicated and maybe not everything is fake.
It felt like Lucy Lennox and May Archer raised the bar with this second Licking Thicket: Horn of Glory book of theirs. Yes, I was a wee bit frustrated with Champ at times, particularly with his handling of his non-relationship with Quinn and his being a wee bit of an irresponsible fur parent to Hercules, aka Herc the pawsome poodle. But when he was charming, goodness, but how the guy had skills. No wonder Quinn couldn't resist him either! Lennox and Archer built this nice, steady thrum of anticipation throughout the book, both in terms of the romance between the main characters and the suspense regarding the acquisition of the Horn of Glory console. Everything HOG is part of the continuing story arc that begin with Hijacked and concludes with the upcoming third Licking Thicket: Horn of Glory book, Hacked. Experience has taught me that the middle book in a trilogy with a shared story line tends to be more filler-like, but that was so not the case with Hitched, which gets five stars. Expectations are even higher going forward!
------------------------
Read my reviews for the Licking Thicket: Horn of Glory series: