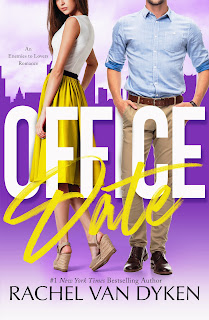 Note: An advance reader copy (ARC) was provided by the author.
Max Emory is back and the self-proclaimed "friggin' matchmaker" isn't just up to his old tricks. Nope, this time around, Max has upped the stakes and the newest batch of interns at Emory Enterprises are his latest victims, erm, littles. Hey, his word choice, not mine. Rachel Van Dyken takes readers back to Max's headquarters in Office Date, which is a total standalone, but if you've read Office Hate, which was released a little over a year ago, then you have a pretty good idea of what I'm talking about when I say these two words: Emory. Games. He's got his sights set on twenty-two-year-olds Jack and Ivy. This second enemies-to-lovers romance finds these two, who have known one another since they were children living next door to each other, teaming up in order to win coveted promotions in Emory Enterprises. They've sniped and bickered and badgered through the years; now, they'll have to work as partners rather than rivals in hopes of winning the top prize of their twenty-something dreams. In the process, though, will they end up losing their hearts, too?
I'm just going to put this out there: Max is my favorite Rachel Van Dyken character ever. And he's one of my top ten all-time favorite fictional male main characters in a book. There, I said it. Fight me. I mean, come on, this is MAX EMORY, matchmaking madman, umm, genius. He helped Mark and Olivia in Office Hate, and now, it's all about Jack and Ivy. Oh, and Max, too, but that's a given. I've never watched Squid Game, but I'm guessing I need to actually look into it after getting a teeny glimpse of what it's about here. I loved the throwback to Nickelodeon's Legends of the Hidden Temple, although I did feel like giving Jack a hug while whispering "Let's rock!" in his ear. Who am I to judge him for his Olmec-phobia? But Ivy was right there to hold his hand and abuse his ribs with her elbow, and these two were a joy to get to know. They went from bickering to bantering while they were partners, and it truly was a partnership, one that led them to a much-deserved happily-ever-after. And maybe some Max-induced trauma as well. I'm giving Office Date 4.5 stars!
Release Date: 02 June 2022
Date Read: 02 June 2022
Learn more about Rachel Van Dyken.
Purchase Office Date on Amazon.