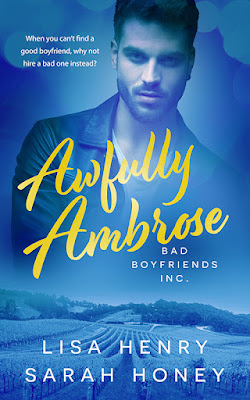 Awfully Ambrose
(Bad Boyfriends Inc. #1)
by Lisa Henry & Sarah Honey
Date Released: June 7, 2022
Pride Publishing
About Awfully Ambrose
Bad Boyfriend, Inc—When you can’t find a good boyfriend, why not hire a bad one instead?
Liam Connelly is a university student in Sydney. He leads an orderly and predictable life of studying, working as a waiter in an upscale harbour restaurant and spending lots of time with his cat, trying to convince himself that after his last cheating boyfriend, he’s perfectly happy alone. Well, mostly happy.
Ambrose Newman is a Bad Boyfriend. Professionally. Someone’s parents don’t approve of that long-haired unemployed bass player they want to date? Well, that’s where Ambrose comes in. For a few hundred dollars a night, he’ll go to dinner with them and their parents and show them that the grass is definitely not greener on his side of the fence. It’s dead. When Ambrose brings a date to Liam’s restaurant, it’s not sparks that fly—it’s glassware.
When Liam needs a date to prove to his visiting parents that he’s not destined to die sad and alone, he calls Ambrose, desperate. If Ambrose can be a bad boyfriend for money, he can be a tolerable one too, right? Which works out great—right up until Ambrose is too nice, and Liam’s parents invite them up to their winery for the long weekend.
Suddenly Ambrose has to be a Bad Boyfriend again, to give Liam an excuse to ‘break up’ with him before his mum starts planning the wedding. But as Liam gets to know the real Ambrose, real feelings start to sneak into the fake relationship on both sides. Under the watchful eyes of Liam’s protective family, who have no idea what to make of Ambrose, their fake relationship evolves into a chance at something real.
When Ambrose has an ugly run-in with Liam’s sister’s fiancé—who’s an even worse boyfriend than him—it might cost him not only any chance he had of convincing Liam’s family that he’s not the nightmare they think he is, but his fledgling relationship with Liam, too.
Reader advisory: This book contains mention of physical abuse and a racist comment. 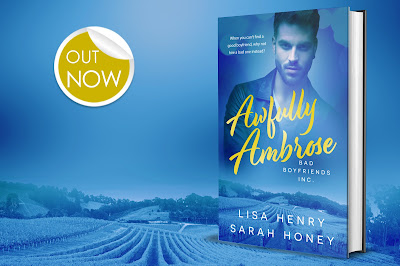 Sarah Honey started life in New Zealand. She came to Australia for a working holiday, loved it, and never left. She lives in Western Australia with her partner, two cats, two dogs and a life-size replica TARDIS.
She spends half her time at a day job and the rest of her time reading and writing about clueless men falling in love.
Her proudest achievements include having adult kids who will still be seen with her in public, the ability to make a decent sourdough loaf, and knowing all the words to “Bohemian Rhapsody”.
Awfully Ambrose will be her fifth published novel in collaboration with Lisa Henry.
Connect with Lisa
Website | Blog | Facebook | Twitter | Instagram | Goodreads | BookBub | Newsletter
Connect with Sarah
Facebook | Twitter | Goodreads