Book Spotlight: Here for the Drama by Kate Bromley 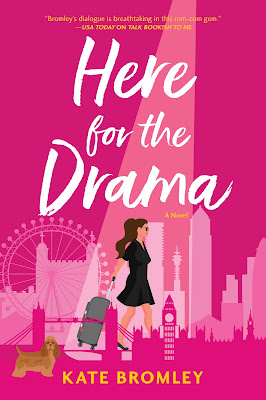 Here for the Drama
by Kate Bromley
Release Date: June 21, 2022
Graydon House Books
About Here for the Drama
This summer, it's much ado about everything.
Becoming a famous playwright is all Winnie ever dreamed about. For now, though, she'll have to settle for assisting the celebrated, sharp-witted feminist playwright Juliette Brassard. When an experimental theater company in London, England decides to stage Juliette's most renowned play, The Lights of Trafalgar, Winnie and Juliette pack their bags and hop across the pond.
But the trip goes sideways faster than you can say "tea and crumpets". Juliette stubbornly vetoes the director's every choice, and Winnie's left stage-managing their relationship. Winnie's own work seems to have stalled, and though Juliette keeps promising to read it, she always has some vague reason why she can't. Then, Juliette's nephew Liam enters stage left. He's handsome, he's smart, he is devastatingly British, and he and Winnie have sizzling chemistry. But as her boss's nephew, Liam is definitely off-limits, so Winnie has to keep their burgeoning relationship on the down-low from Juliette. What could go wrong?
Balancing a production seemingly headed for disaster, a secret romance, and the sweetest, most rambunctious rescue dog, will Winnie save the play, make her own dreams come true, and find true love along the way—or will the slings and arrows of outrageous fortune get the best of her?

Kate Bromley lives in New York City with her husband, son, and her somewhat excessive collection of romance novels (It’s not hoarding if it’s books, right?). She was a preschool teacher for seven years and is now focusing full-time on combining her two great passions – writing swoon-worthy love stories and making people laugh. She is also the author of Talk Bookish to Me.
Connect with Kate
Website | Facebook | Twitter | Instagram | Goodreads