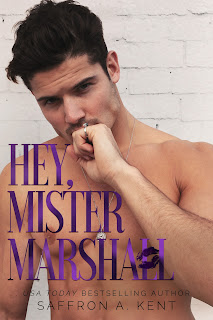 Note: An advance reader copy (ARC) was provided by the author via Wildfire Marketing Solutions.
Hey, Mister Marshall is the fourth and final standalone novel in Saffron A. Kent's St. Mary's Rebels series. Four years ago, Poe Blyton lost her mother and not only found herself under the guardianship of Alaric Marshall but was sent to an all girls reformatory, St. Mary's School for Troubled Teenagers. Now eighteen, Poe is close to finally being free of both St. Mary's and her tyrant of a keeper. But one major twist happens, and her guardian is now also St. Mary's new principal. Thirty-five-year-old Alaric has gone from Mr. Marshall to being Principal Marshall, and Poe's life is now an absolute nightmare. But she refuses to take this latest change sitting down. Mr. Marshall has made her life miserable over the past four years, and now, Poe has no qualms whatsoever returning the favor. Alaric may be a gorgeous genius but that won't stop her from taking him down.
One of my favorite things about the St. Mary's Rebels series is how Saffron A. Kent's female main characters who go from being girls who had lost their way in one form or another to young women who were beginning to pave their own paths and discover who they truly wanted to be. While Salem and Arrow from My Darling Arrow (St. Mary's Rebels #1`) will forever remain my favorite couple from the series, Poe and Alaric are a close second and Poe is certainly my favorite female main character. I loved how spunky she was as well as her refusal to kowtow to anyone. As for Alaric, once those layers were peeled back and we get to know more about his back story, I had a greater understanding of what made him tick. This being the end of the series is bittersweet, but I think that it's ending on a high note. Hey, Mister Marshall is a 4.5-starred slow burn romance I adored.
Release Date: 14 June 2022
Date Read: 13 June 2022
Learn more about Saffron A. Kent.
Pre-order Hey, Mister Marshall on Amazon | Apple Books | B&N | Kobo.