Review: Between Hello and Goodbye by Emma Scott 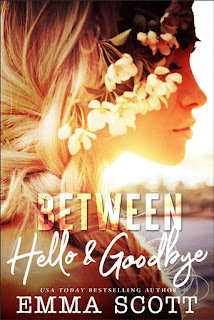 "I love you," he whispered. "I don't know much of anything anymore, but I know that. Whatever is left of me is yours."

"I love you," I said against his mouth that I was still kissing, his tears and mine mingling. "I'm never going to walk away from you again."

"And I swear on my life I will never give you a reason."

I needed a whole lot of time to contemplate the impact Emma Scott's newest standalone novel had on me before I could even attempt to write a review that would aptly put into words everything going on in my heart and head. If you're a longtime reader of Scott's, then you've probably met Faith Benson before, namely, in Someday, Someday, which just happens to be my absolute favorite among all of the books I've read penned by this author. Faith made quite an impression in that 2019 read, and Scott did write a short story about her entitled A Meet Cute and Other Natural Disasters in One More Step, a multi-author anthology published in 2020. While that short was sweet and sassy--just like Faith--Between Hello and Goodbye is far more than an extended version of it. It's a moving reminder that while hellos and goodbyes matter, all the more what happens in between.
While there's no denying that twenty-nine-year-old Faith Benson never fails to land the big accounts, when she's mandated by her boss to go on a two-week-long leave of absence, she realizes she needs to do some serious soul-searching. She's a city girl living in Seattle who's always up for a good time, but maybe it's time for her to woman up and decide where her life's headed. She didn't quite expect it to be the emergency room, though, but that's what happens when a mishap while exploring the small Hawaiian island of Kauai leads to a bad ankle sprain. She considers cutting her trip short, but then Asher Mackey surprises her with an offer to help her out until she's back on her feet. Considering his bedside manner left a lot to be desired when the thirty-one-year-old firefighter rescued her, she's taken aback. They both promise to keep things strictly platonic, but the connection between them can only be denied for so long. Falling for each other becomes inevitable, but can they survive the distance and devastating losses?
Where do I even begin with this novel? Emma Scott has always had a way with words, but this author also seems to have an uncanny gift to weave together stories and create characters that work their way into the hearts of countless readers. In Someday, Someday, Faith was unapologetically who she was, she's still got that brazenness to her in this new book, but she also comes to realizations once Asher becomes a part of her life. That being said, Asher made it his life's mission to care for and serve everyone, especially his younger brother, Morgan, but he seemed to forget himself in the process--until Faith came along. These two belonged together, but they also had the odds stacked against them. Their journey broke my heart at certain points, but ultimately, theirs is a story that is uplifting and soothed my soul and one that included several unforgettable supporting characters. Between Hello and Goodbye is one of 2022's must-reads and snags all the stars.
Release Date: 26 June 2022
Date Read: 11 June 2022
Learn more about Emma Scott.
Purchase Between Hello and Goodbye on Amazon.