Book Blitz: The Right Kind of Unexpected by Rayna York 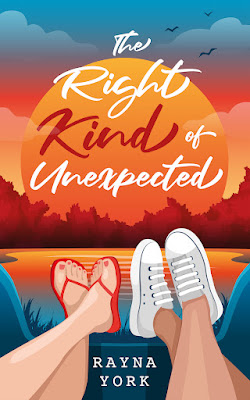 The Right Kind of Unexpected
by Rayna York
Date Released: June 18, 2022
About The Right Kind of Unexpected
Tess hasn’t experienced many kindnesses in her eighteen years. When her boyfriend abandons her at a small-town gas station, it’s just one more crappy event to add to the pile. Without a car, money, or cell phone, her options are limited, and calling her parents isn’t one of them. So when the family that owns the business throws her a lifeline, she grabs hold. Because even the worst situations can have a silver lining, and this one is a town called Jasper Creek, a diner everyone calls Earl’s, and a young mechanic named Colten Reed.
Rayna York’s standalone novel gives readers the small-town romance they crave with enough feels to make the heart sing. It’s the perfect feel-good, summer romance.

An Excerpt from The Right Kind of Unexpected
I rush to the bathroom at the side of the building and lock the door behind me. I can’t deal with this anymore. I grip the sides of the pedestal sink and drop my head, breathing deep. In, out, in, out, fighting for calm.
Why? Why did I think this was a good idea?
Three days ago, Dax and I were on our way to a gallery opening when I mentioned I’d never been to Disney World. He said he hadn’t either. I commented on how it would be fun to jump in the car and go. High school graduation was over, my parents were in Europe, I didn’t have any plans for the summer, so the next afternoon we were on the road.
Bad idea.
Horrible.
The worst.
I lift my sunglasses to the top of my head and startle at the red-rimmed, brown-eyed zombie staring back at me. I haven’t had a good night’s sleep since we left, and I forgot to take my makeup off last night, then Dax was in such a hurry this morning.
Maybe our relationship was always a mess. I don’t know. We’ve only been together for six months. In New York, Dax and I got along great. There were parties, restaurants, people, and places to fill our time. Now, without the distractions and being stuck together in mostly confined spaces, I realize we don’t have as much in common as I thought. But it’s more than that. He needs to be right about everything and nags me until I concede to his views. I never noticed him doing that before. There are a lot of things I didn’t notice before.
I use a little soap and water on a paper towel and clean the black smears from around my eyes. It cleans the makeup off perfectly, but the dark circles and puffiness remain. I slide a hair elastic from around my wrist and pull my brown mop of humid-induced frizz into a messy bun.
With a deep sigh, I slide my glasses back over my eyes and push the door open into the bright sunlight. I take in the beautiful field dotted with wildflowers behind the gas station, then close my eyes and lift my face to the sun, disregarding the intensity on my pale skin. I breathe in the fragrant smell of green that only a sweltering heat can produce.
It’s time to put an end to this impromptu adventure. It ceased being fun after the first five hours. And it’s my car, my time, my money. With renewed strength, I turn on my heels, ready to confront Dax and get my car keys back. I’m heading home with or without my soon-to-be-ex-boyfriend. I can drop him off at a bus station if he wants to continue the trip.
I round the corner of the building. Wait, what? Where is it?
I walk to the two ancient gas pumps and turn in a circle, taking in the white building with peeling paint, and everything else in the three-hundred-and-sixty-degree radius, but the car is nowhere in sight. I walk to the other side of the building, thinking he might have parked in a different location while getting something from inside, but the car isn’t there either. 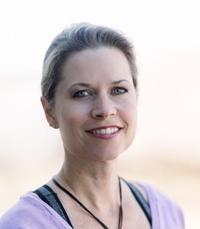 Rayna York grew up with hippie parents that liked to adventure. Where change was the norm, books were her constant—a way to escape. As an adult, many careers came and went, but writing has always been her passion. Everything I Knew to Be True was her first published novel.
Connect with Rayna
Website | Facebook | Instagram | TikTok | Goodreads | Newsletter