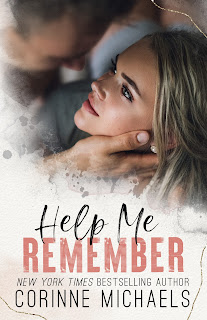 Note: An advance reader copy (ARC) was provided by the author via Valentine PR.
Corinne Michaels has a new series set in a small town, and it kicks off with some romantic suspense vibes. Help Me Remember is the first book in the Rose Canyon series, and it introduces readers to the town where a group of four lifelong best friends--Isaac Davis, Spencer Cross, Emmett Maxwell, and Holden James--grew up in. When Isaac's sister, twenty-eight-year-old Brielle, wakes up in the hospital, she's shocked to learn that she's lost three years' worth of memories. More devastating is the news that her beloved brother has been killed and the lone witness is none other than her. Those around her have been cautioned about giving her any hints when it comes to the past three years, worrying that her potential testimony will be considered tainted, thereby weakening any case against the unknown perpetrator of Isaac's murder. Brielle needs answers, and the only person willing to take up her cause is the friend who was closest to him--investigative journalist Spencer. The more information uncovered and the more her fragmented memories come together, more questions arise. She may have wished she could remember, but what if all she wants now is to forget?
Talk about getting this brand-new series off to a great start! I love a well-written romantic suspense read, especially when it holds your interest and has you all invested in the characters and everything that's happening between and around them. I don't want to give anything away, so I'm being extra careful with this review. After all, part of what makes a romantic suspense story good is the mystery that the main character/s has/have to figure out. As far as who was behind Isaac's death and Brielle's attempted murder, I was certainly kept guessing. When it came to one particular aspect of Brielle's recent past, though, I pretty much surmised what was going on, and goodness, but how my heart went out to the person she was involved with. I quite liked the interactions among Isaac's best friends because there's a clear camaraderie that's there, one that's on solid footing given all their years together. As for the romance, I liked the ten-year age gap and the whole secrecy thing that was happening and the history behind the relationship. I'm giving 4.5 stars for Help Me Remember, and I'm really looking forward to Emmett's story, which is up next in the Rose Canyon series.
Release Date: 14 June 2022
Date Read: 11 June 2022
Learn more about Corinne Michaels.
Pre-order Help Me Remember on Amazon | Apple Books | B&N | Kobo.