Review: Forever with Me by Claudia Burgoa (Everhart Brothers #4) 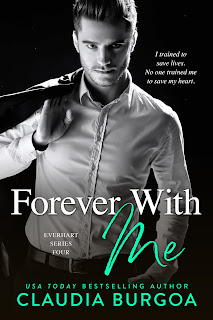 Note: An advance reader copy (ARC) was provided by the author via Wildfire Marketing Solutions.
Over three years later, and the Everhart Brothers series is finally complete! Claudia Burgoa has just published the awaited fourth and final book, and readers get to see how the lone single Everhart gets his happily-ever-after. Yep, we're talking about Fitzhenry Everhart, aka Fitz. This forty-five-year-old is a successful lawyer who co-owns a law practice with one of his brothers, Hunter. When a potential client raises red flags, Fitz reaches out to his brother, Harrison, who is part of The Organization, a covert group specializing in security and intelligence. In order to ensure Fitz's safety while also gathering vital information on the suspicious client-to-be, The Organization decides to send in thirty-year-old Byron Langford, aka Lang. His being an actual lawyer play wells as he joins Everhart and Everhart as a junior associate, but he also needs to be able to remain close to Fitz beyond office hours. So, what better way to do that than have Lang pretend to be Fitz's boyfriend? But while Lang has always been good at his job, being with Fitz slowly starts to not feel like a job...
If you're familiar with Claudia Burgoa's writing, you know that there tends to be a slew of crossover characters from quite a few of her series. Funnily enough, instead of having the characters from Everhart Brothers series more present here, it's the ones from Burgoa's Luna Harbor series that tended to be more prevalent, or at least that's how it felt to me. All that being said, when you focus on just Fitz and Lang, there's no denying that these two seemed to be just what the other needed in their lives. Both have walls and have been known to shy away from forming connections with other people, although they definitely have extremely strong bonds with their respective families--Fitz with his brothers and the families they've formed and Lang with the family he's created for himself by way of friends. Having read and loved the first three books in the series and that leading to high expectations, Fitz and Lang's story did fall a wee bit short. Don't get me wrong; Forever with Me was an appealing read, just not at par with its predecessors. Three stars.
-------------------------
Read my reviews for the Everhart Brothers series: