Review: Mine to Save by Jen Talty (Safe Harbor #2) 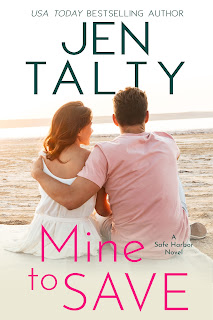 Note: An advance reader copy (ARC) was provided by Lady Boss Press via Grey's Promotions.
Mine to Save is the second book in the Safe Harbor romantic suspense series from Jen Talty and published through Kristen Proby's Lady Boss Press. This is Emmett Kirby and Trinity Hughes's story and may be read independently of the series starter, Mine to Keep. What should have been nothing more than a regular day for forty-year-old Emmett Kirby, a lieutenant with Lighthouse Cove's police department, turned out to be a lifechanging one the minute Jeff Allen approached him in the local diner. The man who was once convicted of killing his wife's lover years ago became the lone suspect in a rash of murders involving men who were cheaters. He believed there was no hope for him even as he proclaimed his innocence, but all that mattered to him was what his estranged daughter thought of him. When Emmett reaches out to thirty-six-year-old Trinity Hughes, she heads to Lighthouse Cove, and together, the two make it their mission to follow the clues her father left behind and try to uncover the truth before it's too late for them both.
While the first book in the series was an enjoyable enough read, this second one surpassed it, as well as exceeding my expectations. I liked that Emmett and Trinity were main characters who were in their forties and thirties, respectively. I appreciated their maturity and how they navigated what was developing between them as a potential couple and how they tackled clearing her father's name. Jen Talty did a great job striking that balance between the romance and the more suspenseful aspects of the story. The mystery was a well-woven one, and while I pretty much guessed who the main villain was early on, I loved seeing how everything unraveled. Aside from trying to figure out who tried to framed Trinity's father, the main characters also had their own baggage, making them even more relatable. Overall, Mine to Save was an enticing 4.5-starred read.
Release Date: 28 June 2022
Date Read: 28 June 2022
Learn more about Jen Talty.
Purchase Mine to Save on Amazon | Apple Books | B&N | Kobo.