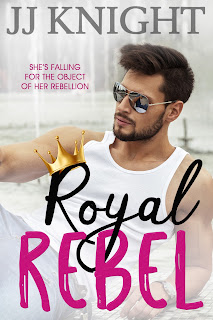 Note: An advance reader copy (ARC) was provided by the author via Give Me Books Promotions.
Royal Rebel is the second book in JJ Knight's Royally Pickled series, the spin-off of her hilariously addictive Pickle series and a part of the Pickleverse. This is the story of Octavia Henrietta Montgomery, aka Princess Octavia of Avalonia and the second in line to the throne after her brother and the heir apparent, Prince Leopold (Royal Pickle, book one in the Royal series). When she was born, her father, best known as the King of Avalonia, decreed that all males between the ages of seven and thirty were banned from working inside the palace. Her brother, however, has recently decided that the time had come to bring in fresh blood to those who worked to secure and protect the palace and the royal family. Glimpsing the palace guards in training, twenty-three-year-old Octavia has developed a crush on one particular trainee and she allows a bit of rebellion to seep in and risks telling him how she feels once she corners him in the rose garden. It would have been terrible if her confession fell on deaf ears; but what happens when it's received by the wrong guard? He's none other than twenty-three-year-old Finlandorio Javien Bulgari, her childhood best friend whom she once nicknamed Dory but now goes by Finley and has earned quite a reputation for being the palace playboy.
Being a member of royalty isn't always what it's cracked up to be. Just ask real-life royals and members of peerage whose tales read more like cautionary ones or straight-up nightmares rather than fairy tales. So Princess Octavia being someone who was stuck in a gilded cage made it easy to empathize with her desire to break free and rebel. Now, this being a JJ Knight romance, there's a lot of humor and lighthearted fare, so don't think of Vi's story as one that will leave a reader downtrodden. There's also a great deal of romance once she rekindles her connection with Finley. Her naivete is nicely balanced out with her more daring side, and being around Finley as well as her younger sister, Princess Lili, gave her that bit of courage to step out of the predetermined lines set by her parents. I loved seeing Vi come into her own and finally take a stand and fight for her happiness. Finley was the perfect partner, someone who saw the real her and had already established a friendship with her from all those years ago. Of course, the cameo appearances of Prince Leo and Sunny and the Pickle crew was a bonus that brought in even more laughs. I thoroughly enjoyed Vi and Finley's sweet, steamy, and snicker-worthy story, and look forward to Lili's next! 4.5 stars go to Royal Rebel.
-------------------------
Read my reviews for the Royally Pickled series: