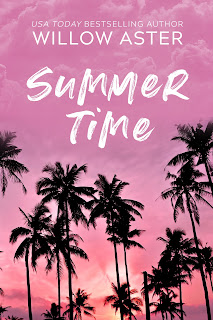 Note: An advance reader copy (ARC) was provided by the author.
Originally released as a serial via Amazon's Kindle Vella subscription program, Willow Aster has published Summertime as a standalone novel. Summer Winters is the story's main character, and readers meet her just as she heads off to Los Angeles to spend time with her estranged father, Cole Winters, who just happens to be one of Hollywood's top directors. While she may have thought that this was going to be some much needed bonding between her and her father, it turns out that he has plans of his own. He decides to put her to work, something she wasn't expecting, but maybe it's a good thing since she's an aspiring screenwriter. Spending time with Hudson Callihan, the assistant director on the film her father is currently working on, is just one of the perks. Unfortunately, she's soon tasked to help the film's lead star, Liam Taylor, improve his image. How? By pretending to be his girlfriend, of course. It wouldn't be so bad if she actually liked the guy, but he's cocky and a player. Summer, however, is about to realize that just like the movies, real life has plot twists too.
Can I just say that I quite liked the title of this book and how the story lives up to it being a time for the titular character, Summer, to have experiences that may change the trajectory of her life? Summer's evolution from the girl who simply wanted some time with her estranged father to the woman who finds love and the possibility of her dreams coming true was the highlight of this book. Admittedly, I was rooting for one particular guy in the beginning, but as the story developed, it was pretty clear who was more deserving of Summer. Now, I'm not a huge fan of the love triangle trope, but I loved how Willow Aster handled Summer with Hudson and Summer with Liam. Another thing I appreciated was that the author didn't skimp on the attention she focused on Summer's relationship with her father, Cole. After all, that was the main reason she went to California in the first place. This book truly was Summer's story, and it was one that left me quite satisfied, and it ended on what I consider the best note possible for Summer. Summertime receives 4.5 stars.
Release Date: 23 June 2022
Date Read: 20 June 2022
Learn more about Willow Aster.
Pre-order Summertime on Amazon.