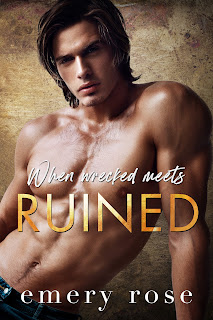 "When I was eighteen, I thought, this is the girl. The one who will bring me to my knees. The one who I will put above all others. I don't love you because it's easy. I love you for all your complicated parts. I love all of you."

This book wrecked me and has ruined me for all other angsty books to come! When Wrecked Meets Ruined is the fourth novel in the Lost Stars series, and it's been on my most anticipated reads for 2022 list ever since I heard about the announcement. I knew going in that this book had the potential to rip my heart out and then slowly stitch it back together, but that's just par for the course when it comes to Emery Rose and her stories. You won't hear me complaining. So, with my box of tissues at the ready, I dove in, and I honestly feel that Ridge McCallister and Evie Bellamy's love story is one of this year's standouts. Just a quick note: While this book may be read as a standalone, I seriously recommend you read the first three Lost Stars novels, When the Stars Fall, When the Storm Breaks, and When We Were Reckless, because they're all absolutely mesmerizing reads--plus each novel features a McCallister, namely, Jude, Brody, and Jesse, respectively.
I'm not going to do my usual spiel and give bits and pieces just to provide anyone reading this review of some idea on what the book is about. I'm a firm believer that Emery Rose's stories are best experienced free of expectations and anticipations. The bare minimum I'm going to give is that Ridge and Evie met in a junkyard when they were both sixteen, and their story plays out over a decade. I think Barry Manilow said it best in his song "Somewhere Down the Road": (They) had the right love at the wrong time. And at times, it almost felt as if there was never going to be a right time for them. Ridge and Evie's story, though, is a reminder that we don't always get it right on the first go or even the second go. Sometimes, it takes several attempts, and when something--that something being true love--is meant to be, it'll happen when the time is right. Yes, Ridge was wrecked, and yes, Evie was ruined, but neither one was irreparable. Together, they were magnificent. This author never ceases to amaze, and I'm eager to see what Rose has up next. For now though, I'll be basking in the wonder that is When Wrecked Meets Ruined. Five-plus stars.
-------------------------
Read my reviews for the Lost Stars series: