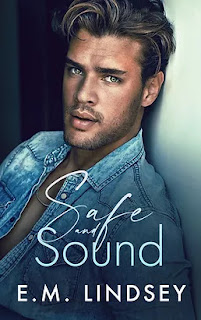 Note: An advance reader copy (ARC) was provided by the author via Gay Romance Reviews ARC Team.
Safe and Sound marks my very first read from E.M. Lindsey, and this standalone M/M romance left quite an impression on me. This was a friends-to-lovers, second-chance romance featuring best friends Regan Moulin and Isaac McKinnon and set in the small town of Dover. They were both nineteen when fate and circumstance would take them in very different directions. Two decades later, Isaac is preparing to return to their hometown. Not a single word of communication was exchanged between him and the boy he loved in all that time, but when he learns of everything that's transpired since they last saw each other, Isaac finds himself at a loss. Regan was convicted of a crime he didn't commit at the same time that he completely lost his hearing. With Isaac back in Dover, will they be able to rediscover the friendship and love they lost twenty years ago?
I do love me a book with angst, and the angst found between the covers of my first ever E.M. Lindsey read wasn't the kind that was there for the sake of creating drama. Regan's lot in life would have probably left lesser men giving up early on, but he took whatever was thrown his way and survived as best he could. I appreciated the fact that five years into his parole, he was slowly but surely beginning to thrive. It was almost as if he was owed a great deal of good fortune after too many years of misery. Isaac was that one bright spot in his younger years, and just as Regan has begun to find his footing again, what sort of effect will Isaac's return have on his life? I liked that their reunion wasn't rushed, and that there was some uncertainty and trepidation on both their ends. I loved that their long journey led to a much deserved happy ending. 4.5 stars for Safe and Sound.
Date Read: 11 June 2022
Learn more about E.M. Lindsey.
Purchase Safe and Sound on Amazon.