Review: Craving the Fight by LP Dover (Gloves Off: Next Generation #1) 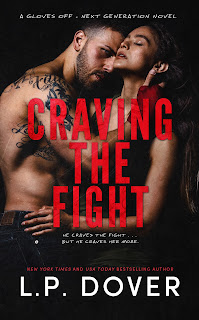 Note: An advance reader copy (ARC) was provided by the author via Enticing Journey Book Promotions.
Craving the Fight is the first book in the Gloves Off: Next Generation series, a spin-off of L.P. Dover's popular Gloves Off series. You don't necessarily need to read the original series in order to fully enjoy this new book. However, those earlier books do provide some background, not just on the first generation of main characters but also on an important part of the series' story arc. I've been looking forward to the spin-off ever since news got out about it, more so the first book because it was going to set the bar for everything to follow. This is a second-chance MMA romance with Carter Reynolds (son of former UFC heavyweight champion Matt Reynolds) and Emma Jameson (daughter of former UFC middleweight champion Ryley Jameson, whose story plays out in Ryley's Revenge, book two in Gloves Off) as the main characters. There were once young and love, but a few years after their break-up, this MMA fighter and heavyweight champion and this successful model are back in each other's lives. Together, they'll have to face a dangerously dark specter from the past.
My expectations were high going into this because I seriously enjoyed the Gloves Off series. Carter and Emma's story certainly kept me entertained from start to finish. They may have been very much in love with one another before, but I appreciated their desire to experience life and what it had to offer each of them. I'm not a huge fan of main characters who do nothing but pine for the other for years post-break-up. I like that these two achieved their dreams as individuals and became more mature versions of themselves once they were beginning to rekindle their romance. Now, as far as the action and suspense aspects of their story goes, let's just say that things are strong and steady and amp up in the latter half. I was on the edge of my seat for all that, and I liked how L.P. Dover didn't skimp on any of the elements. While Carter and Emma do get their happily-ever-after here, my curiosity is already piqued with as far as the rest of the cast of characters goes. I also wonder what'll happen when their parents discover what they're hiding! Four stars for Craving the Fight.
Date Read: 02 June 2022
Learn more about L.P. Dover.
Purchase Craving the Fight on Amazon | Apple Books | B&N | Kobo.