Review: Ever Mine by Laura Pavlov (Honey Mountain #2) 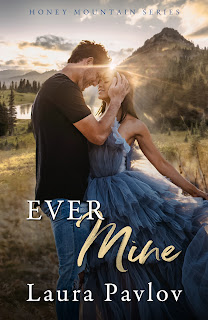 Note: An advance reader copy (ARC) was provided by the author.
Ever Mine is the second book in the Honey Mountain series from Laura Pavlov and features a second-chance romance between a professional hockey superstar and a sports psychologist who were once each other's first love. When Everly Thomas walked away from Hawk Madden after they graduated from high school, and over the past nine years, she's made every effort to avoid him during the rare moments they both happened to be back in their hometown. But fate has intervened, and now, they're both in Honey Mountain and there's no escaping Hawk--not when he just happens to be her new client. Maybe he'll finally get answers as to why she ran back when they were eighteen, and maybe now at twenty-seven, she'll choose to be by his side--where she's always belonged.
I was worried I wouldn't like Everly as much as I did her sister Vivi, whose story in Always Mine kicked off the Honey Mountain series a couple of months ago. I'd initially thought of her actions after the death of their mother as selfish, but after now getting to know her, the reminder that we all grieve differently stands out. Sometimes, we need to put our own welfare first. Maybe it's a matter of self-preservation, and Ever doing everything she did back then was necessary in order for her to not drown in grief. She may have broken Hawk's heart in the process, but kudos to him for not being the sort of guy who wanted to get back at the girl who was behind said heartbreak. He was genuinely a person who was kind, caring, and thoughtful. Talk about book boyfriend material! All in all, I liked the story and characters, which is why Ever Mine gets 4.5 stars.
-------------------------
Read my reviews for the Honey Mountain series: