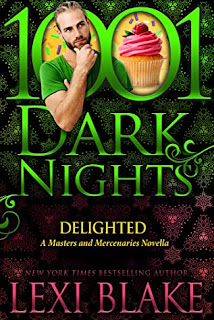 Note: An advance reader copy (ARC) was provided by the author.
Would it be corny if I say that Delighted was a delightful read? Maybe, but I don't care because at the end of the day, I mean it. Lexi Blake's newest novella in her epic and beloved Masters and Mercenaries series had me absolutely delighted, both by the sweet and steamy story and the cast of characters, which of course, includes the usual M&M suspects. While you don't necessarily need to read the other books in the series in order to fully enjoy this new book--and yes, there are quite a lot considering there are over forty currently available stories in the Masters and Mercenaries book universe--just be aware that numerous characters who've been spotlighted in the past do pop in regularly.
Delighted is Brian "Boomer" Ward's story. Just like many who work with McKay-Taggert Security Services, he's former military but has been part of MT's investigative team for ten years. He's a truly good guy who has a soft spot for strays, as evidenced by Puddles  the pitbull mix, Sprinkles the Chihuahua, Sheba the cat, and Molly the monk parakeet. When his twelve-year-old neighbor, Lou, shows up at his door, he doesn't hesitate to offer her a place to stay while waiting for her mom to get home--the same mom that Boomer has had a crush on from the moment he saw her. But can he prove himself worthy of someone like baker and single mother Daphne Carlton and her whiz of a daughter, Lou?
Dare I declare Boomer as the cinnamon roll hero of the year? I swear, the guy was beyond sweet and his sincerity just added to his swoon-worthiness. I love how he was with both Daphne and Lou. Heck, he was awesome with all the females in his life, regardless of age. He was respectful, loving, and loyal to everyone. As for Daphne, I liked seeing her gain confidence and stand up for herself and for Lou. Speaking of Lou, she was awesome, and the friendships and bonds she built with the other MT kids was one of my favorite things about this read. The epilogue has me super excited for what the future holds for Lexi Blake's Masters and Mercenaries book world. I'm giving Delighted five stars.
Release Date: 07 June 2022
Date Read: 04 June 2022
Learn more about Lexi Blake.
Pre-order Delighted on Amazon.