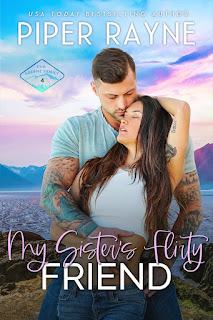 Note: An advance reader copy (ARC) was provided by the author via Wildfire Marketing Solutions.
My Sister's Flirty Friend is the fourth novel--but sixth book overall--in Piper Rayne's The Greene Family series. This is Jed Greene's story, Jed being thirty-three and the eldest among Marla Greene's kids. Jed is closest with Cade (My Beautiful Neighbor, book one in The Greene Family), and co-owns Truth or Dare Brewery with him. When Jed receives the shocking news that he's a father to a three-year-old girl named Emilia, things are further complicated by the fact that Emilia's mother has passed away, leaving Jed as her sole guardian. So, what's the first thing he does? He sleeps with his sister's best friend--the same best friend who works alongside him at the brewery. Twenty-nine-year-old Molly Monroe has a reputation, as does Jed. Neither is looking to be tied to the other, but soon, everything between them gets tangled up in the secrets and inescapable responsibilities.
I'm not surprised that Jed was paired with Molly, and since I read A Greene Family Summer Bash, I had an idea what Jed's story would be about, but I had no clue what direction Piper and Rayne would take. I had a better appreciation for both Jed and Molly, especially the former, given the journey he took from the moment he learned he was a father--and one who had no one to co-parent with at that! It was clear in the previous books that Jed bore the emotional scars from his father's infidelity and the man's subsequent less than admirable treatment of his ex-wife and his children. So seeing Jed mature and take responsibility for Emilia and truly come to his own as a man and a father had to be my favorite thing about this book. I also liked seeing Molly in a whole new light, giving me a better appreciation of her. 4.5 stars go to My Sister's Flirty Friend.
-------------------------
Read my reviews for the Greene Family series: