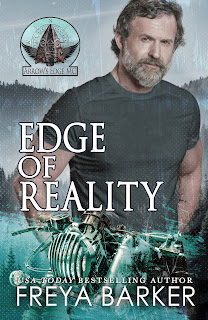 Note: An advance reader copy (ARC) was provided by the author via Buoni Amici Press.
Freya Barker is one of those rare authors who has yet to disappoint. I've yet to read all of her previously published work, but the one's that have passed through my tablet so far have been stellar reads, and Barker's Arrow's Edge MC series has become a personal favorite. Five books in and this series continues to leave me happily satisfied by the end of each read. Edge of Reality is the fifth and latest novel, and this time around, we've got Paco and Mel's story. Born Nathan Philips, fifty-year-old Paco discovered the true meaning of brotherhood and family because of Arrow's Edge, the motorcycle club that's actively trying to make a difference in the lives of troubled and runaway boys. Forty-eight-year-old Melanie Morgan is the club's lawyer, with her specialization in family being an asset to them. Paco's had his heart set on the single mother for years, but Mel has never taken his interest seriously. When she finally does the mutual attraction between them, everything becomes complicated when a little boy comes into their care.
Paco and Mel's story, which very much included Mason and Lindsey, had a hold on my heart. Mel have tried--to no avail--to resist Paco for as long as she did, but these two shared a connection that refused to be denied, although it was delayed for a bit. I loved th fact that Mel was as fierce as she was, determined to do things her way and make no apologies for the fact that who she was and what she had achieved. It was a trait she passed on to her adult daughter, Lindsey--whose story I'm already eagerly awaiting, especially after everything that she and the guy I suspect she'll be paired with went through in this book. I think that no one could have been better suited for Mel than Paco. The guy was dedicated, loyal, and loved beyond measure, whether it be Mel, Arrow's Edge, Mason, and anyone who became family to him. The romance aspect was at par with the suspense aspect, which isn't as easy a feat to achieve as one would think. Edge of Reality was endearing and intriguing and I can't wait for more from this series. Five stars.
-------------------------
Read my reviews for the Arrow's Edge MC series: