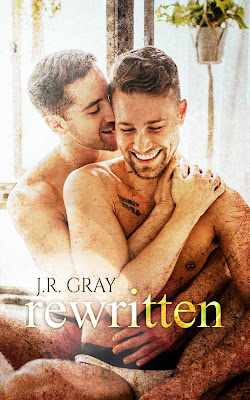 About Rewritten
Movie star 102: The headlines are never what they seem.

Quellcrist wasn’t new to fame or the effect it had on a relationship. He’d been married in the spotlight for as long as he’d been famous. But that was before Hale. He knew it was going to test him but even he hadn’t known the toll that months apart would take on his fledgling relationship.

Long days of shooting, different time zones, calls every day dwindled to days without calls, and rumors were all over the rags. Through it all Quell had to battle his own worst enemy but he didn’t know how to win against something inside him. Depression ate him whole and pain took over.

There was so much more at stake than losing his boyfriend, he was losing his best friend. His lifeline, the love of his life. Was there any way to come back from the damage done?

Can they rewrite their ending? 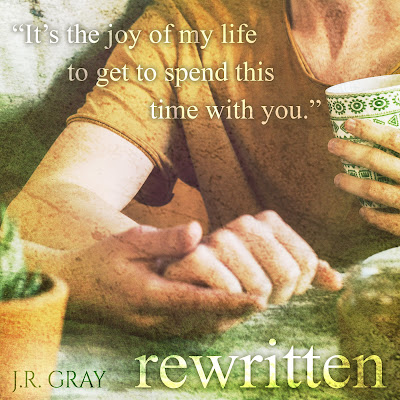 Read my four-starred review of Rewritten. 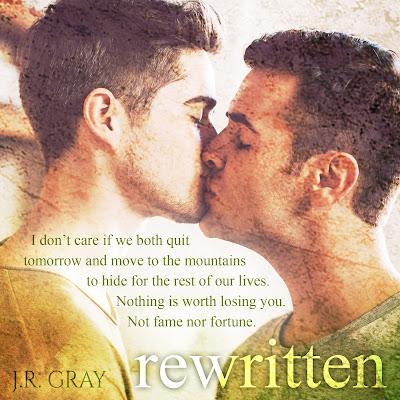 An Excerpt from Rewritten
I woke up wrapped in Quell’s arms. We were home. We’d been here for weeks and I still wasn’t used to it. The light streamed across the foot of our bed in a fractal pattern. I could smell the ocean or maybe it was my imagination. How easy this was. We had a ticking clock, but it had been a small taste of how our time off would be. How waking up with Quell would be when we didn’t have to be on set eighteen hours a day. Our life was slow and I loved him more every day we spent here. Our demeanor had changed with the pace of our life.

He was lovely lying there still asleep. I’d never seen a more beautiful human in my life and he was my partner. It was hard to believe we had a week left of this.
And then uncertainty.

I didn’t like going into a drastic change in our relationship without building up to it, but we didn’t have much choice. I guess it was going to be trial by fire. Because for as many times as I’d tried to talk to Quell about it he hadn’t seemed to want to. So I’d left it. We loved each other. We’d find a way to make the time apart work.
I had nothing booked for the next nine months, and Quell had two movies.

I was about to detangle myself to go make coffee when Quell’s phone started to ring. I reached for my phone to check what time it was. After seven. I was shocked he’d slept so long. More often than not, since being home, he was off wandering the house before I was even awake. I’d gotten so used to it—it was strange to wake up in bed with him. Maybe he was settling into our life here.

I pressed into him and kissed along the back of his neck. Maybe I would stay awhile. Quell was better than coffee any day.

“Is that my phone?” Quell mumbled, sleep evident in his tone.

He groaned and rolled towards me. “Who would be calling me so early?”

“Just after seven. I’m shocked you’re still in bed.” I pushed my fingers through his hair.

He turned and kissed my palm. “I am too. I slept hard.”

“You needed it.” More than I even think he realized.

The phone quieted and he kissed me. I lost track of time in Quell’s lips and soft touches. It was an entirely new way to wake up. One we’d not even had filming Pirate Night. Then we were eating, rushing off to call or Quell had been up on days off. Lots of training sessions. I liked that he’d moved them to a different time.

I stroked my fingers down his sides and over his back. He grabbed me in a hug so tight I could feel his heart beating against mine. We laughed and kissed and I was happy.

Happy felt good. Not that I’d been particularly not happy before meeting Quell, but this was a whole new level of the experience. Now if only my career was less uncertain I’d feel a whole lot better, but I guess that was the nature of the job. Quell would get a contract for another season of Pirate Night before he left. I had faith.

The vibrating started back up.

“Who is calling me this early?” Quell said through a yawn rolling half out of my arms to grab his phone. He squinted at it then answered.

“No idea. Who is it?” I asked before realizing it might not be the best to expose the fact we were in bed together, although anyone calling his cell would probably know.

He put his hand over the speaker, as if that did anything, and said, “It’s our publicist.”

We’d shared one now since he’d left his other because of the conflict of interest with Rachael. Mark was good at his job and more on top of things than Quell’s last one had been.

“Yes, Hale is with me,” Quell said with a chuckle and I was sure I knew what was running through his mind. ‘Naked wrapped up with me.’ “I’m going to put you on speaker.”

Quell clicked the button and held the phone between us.

“Hello, Hale. Since I have you both—” He wasn’t one to beat around the bush, so he dove right into it. “There are some pictures from last night I woke up to questions about. They are already being widely run… so the concern is more: do we have a comment?”

J.R. Gray is a cynical Chicago native, who drinks coffee all day, barely sleeps, and is a little too fashion obsessed. He writes realistic and damaged characters because everyone deserves a happily ever after.