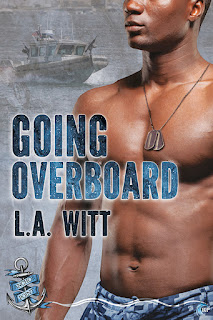 I met his blue eyes across the table.

You're the most amazing person I've ever met.

I cleared my throat.

What if you never know?

He watched me. Curious. Waiting.

What if I tell you and it fucks things up? What if telling that means this is over?


Four books down, with four more books to go, I'm going to be both ecstatic and anxious with every release in the Anchor Point series this year. From the moment L.A. Witt set her series starter, Just Drive, in 2016, I've looked forward to each new couple and story that she's introduced to fans and readers. With the end of the series on the horizon (NOOOOO!!!), I'm relishing the latter half of the collection, hopeful that they'll be as fantastic as the first four. Well, I've already gotten my greedy, fangirling hands on the fifth book, and I continue to be addicted to all things Anchor Point. This had a friends-to-lovers story with an antagonist I desperately wanted to throw overboard.

Going Overboard is about best friends Dalton Taylor and Chris Ingram, having forged their friendship in coxswain school. They're both second class petty officers who feel as if younger masters-at-arms have passed them by given both Dalton and Chris have been in the Navy for a decade and a half. Their hopes for advancement, however, are put at risk when Dalton is involved in an accident caused by the negligence of his immediate superior. An investigation looks to pin blame on Dalton and another sailor while making the MA1 come out smelling like roses. Chris sees how everything is affecting Dalton, but what options do they actually have against their MA1 and Chief?

Coming so close to losing Dalton has Chris seeing their situation in a whole new perspective. Not only has he kept his sexuality from the person closest to him, but he's hidden his not-so-platonic feelings from Dalton as well. What he doesn't know is that his best friend has been harboring far more amorous thoughts and emotions too, but Dalton has always assumed that Chris was straight. Will crossing the line between friendship and more end up costing them years of kinship or could this end being the best thing that finally ever happened to them? And when their flourishing romantic relationship is threatened by their superior, will Dalton and Chris choose to sink or swim?

I honestly don't know how L.A. Witt manages to have come up with five different stories--with three more yet to come--set, not just in the same town of Anchor Point, but in the same institution. Dalton and Chris's story was about a relationship that transitions from platonic to romantic, but we also get to see the politics that come into play when it comes to rank and the potential abuse of power. The main antagonist in this story seriously had me wanting to jump into my tablet and smack him a few times before dumping his autocratic ass in the frigid waters of the Pacific or Atlantic. Ugh. I didn't have much sympathy either for his protege who was an entitled wannabe too.

As far as the love story between Dalton and Chris is concerned, kudos to the author for keeping it as drama-free as possible. There weren't any unnecessary complications thrown just for the sake of making everything far more angsty. They were already facing problems with their careers, especially Dalton, and I think that was more than enough to stir up tension in the story. As always, Witt balances heart and heat in Going Overboard, and with every new addition to the Anchor Point series, she looks set on making it reeeeeaaaaallllly difficult to say goodbye. If you've yet to read any of the books in the series, feel free to jump heart first into Going Overboard. Five-plus stars. ♥