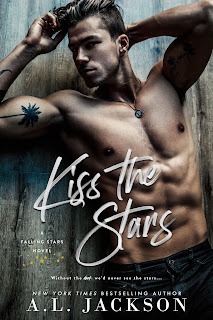 He was hotter than a thousand blazing suns.

Yet somehow colder than the darkest hell.

One not sent as a wish, but rather a warning of what would soon burn out.


Goodness, but how this gave me one heck of a major book hangover! After listening to the first Falling Stars book, Catch Me When I Fall, I was a wee bit worried because it had set the bar in the stratosphere. Well, I needn't have worried because Kiss the Stars? It sent that bar into the celestial sphere, thanks to A.L. Jackson's moving story of two people who have made their share of mistakes and have learned the hard way that happy endings aren't guaranteed but unexpectedly find it within reach if they give their connection a chance. For the record, characters from Jackson's Bleeding Stars series--from which this new Falling Stars series was spun off of--are present and accounted for her, especially Lyrik West, whose own story plays out in the third Bleeding Stars novel, Where Lightning Strikes. Why? Well, his younger sister, Mia, is the female main character in this new book! If you're like me and you have yet to read the earlier series (I know, shame on me!), no worries, because you'll still be able to follow along and understand whatever going on in Kiss the Stars, which pairs Mia West with drummer Leif Godwin.

Mia West may not have had a man in her life, but it was still a rather good life that she was living. She had two amazing children, co-parented well enough with her ex, had an amazing brother and sister-in-law, and had her own gallery where she worked with her best friend. One act of violence took away her best friend and so much more. Mia fears that whoever committed the crime is still out there, and her older brother has vowed to do anything and everything to protect her and her children. Staying in Savannah for a couple of months while her brother's band, Sunder, records their new album could be the distraction Mia needs, but finding out who the stand-in drummer the band got is and that he's staying in the guest house may be more temptation than distraction. Leif Godwin, however, sees himself as more destruction than anything else. His life has changed over the past few years, but he's only got two goals in mind: helping his new band, Carolina George, make it big and doling out the reckoning on those who took what mattered most from him. Leif knows falling for Mia is wrong; so why does it feel so right?

In Catch Me When I Fall, Leif is already mentioned as having a wife, so in terms of story line, you could go ahead and read Kiss the Stars first and wait for the eBook of Catch Me When I Fall rather than listen to the audiobook, but then both books can be experienced as standalones, which means either way should be good. There's a lot of character development that goes on in this new novel, and thank goodness for that because both Leif and Mia were coming from a dark place as individuals. I couldn't help but empathize with these two. The more I learned about what they'd gone through, the more emotionally invested I became. The supporting characters were also notable, especially the kids. (Is it too early to hope that they get their own spin-off series in a few years? Consider my fingers and toes crossed, A.L. Jackson!) Fair warning: there's a fair amount of angst in this book, so if you're looking for a lighthearted read, I suggest you look elsewhere, BUT make sure to add this to your to-be-read list because it's certainly worth reading. Just have a tissue or two at the ready. I'm giving Kiss the Stars five-plus stars. ♥ 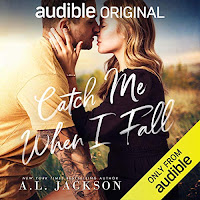 Purchase Kiss the Stars on Amazon.