Review: Move the Stars by Jessica Hawkins (Something in the Way #3) 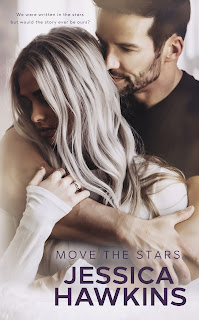 “For as long, you've been perfect to me. Untouchable. Unblemished. Now I want to touch, Lake. I want to blemish you. I  don't want you perfect anymore. I just want you.”

Jessica Hawkins made sure the wait for Move the Stars, the third and final novel in her highly addictive Something in the Way trilogy, was worth all the anxiousness and anticipation involved. Manning Sutter and Lake Kaplan's love story is anything but easy. It is as complicated as complicated can get, but then their story reminds me of the saying that anything worth having is worth waiting for, but let me amend it by saying that it should also be worth fighting for. In the case of Manning and Lake, I so wanted the former to fight for the latter and the feelings that they shared. But maybe it took the heartache and their years apart for them to realize that what they had was extraordinary--that it was something that was worth taking a stand for and defending to the death. Okay, maybe bloodshed need not occur, but you know what I mean. And the love these two had? Damn it, it needed fighting for.

Book three takes place four years after the events in the second book, Somebody Else's Sky, and it's told in two parts, five then six years apart. Part one finds Lake in New York, the last place that Manning expected her to head to, and the last place Lake expected to find him waiting for her. He let her go, envisioning a completely different life than the one he realizes she's now leading. Decisions are made, plans formed, but then one phone call shifts the trajectory of their lives yet again. It takes over five years for their lives to criss-cross, and this is where part two begins.  From New York, we find them in California. A lot has changed for Manning and Lake, but in that amount of time, neither one has seen the other. She's far from the innocent sixteen-year-old of eleven years ago, but is he still the hesitant, self-sacrificing, sad man doesn't believe himself deserving of the only girl--woman--to own his heart?

The author saved the best for last, and that's saying a lot because the first two were nothing to sneeze at. I've become so emotionally invested in Manning and Lake's story because they've been through so much together and apart. They had their reasons for the choices they made--whether those be about sacrifice, penance, or good, ol' self-preservation--but at the end of the day, they had to come to a place where they were BOTH ready to make a go of it all. It felt frustratingly long for them to get where I wanted them to be at, but once we were all there (oh yeah, I am SO making myself part of this journey), damn, but how I satisfied smile broke across my face and it was there for the duration, even after the novel had ended. Move the Stars was a five-plus-starred stunner of a read, and the Something in the Way trilogy has so ensured Jessica Hawkins a permanent spot on my list of go-to authors. ♥

Read my reviews for the Something in the Way series:

Something in the Way (book one) - five stars - My Review