Review: Somebody Else's Sky by Jessica Hawkins (Something in the Way #2) 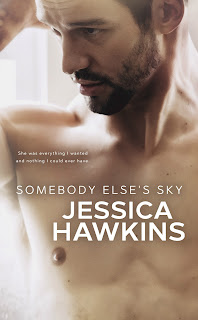 Nooooo!!! Gah!!! I had to remind myself that my poor tablet was not capable of defending itself from my very, umm, expressive reaction to the end of Somebody Else's Sky. Of course, I knew going into this second novel in the very talented Jessica Hawkins's Something in the Way trilogy that it would end just like the series starter--with an evil cliffhanger. If the first book was gut-wrenching when it ended, this sequel was heartrending. I wanted desperately to have someone to blame for the misery that the main characters found themselves drowning in, and if I'm being absolutely honest here, I did find someone. The choices they made are why they're at where they're at.

A year and a half after the events of Something in the Way finds Manning Sutter still hopelessly in love with the girl seven years his junior, seventeen-year-old Lake Kaplan, and vice-versa. An age difference like theirs wouldn't really matter if they had both been ten years older than they are in the story. With Lake being underage, there was no pursuing her and being with her fully, not in Manning's eyes. He wanted to give her the world, a world he wasn't entirely sure he was equipped to provide for someone like Lake. So instead, Manning sacrificed himself, signing on for something that he never truly wanted, but going into it believing that this was what was best for everyone else.

My frustration level hit a high when it came to Manning, and maybe a great deal of that had to do with his taking away Lake's ability to choose for herself what path it was she wanted to take. The far more cynical part of my heart pointed out that Manning repeatedly had to justify why he made the choice that he did and when you end up having to do that, then that's basically just you excusing how wrong you were. Sigh. In hindsight, maybe it WAS for the best, and I hope that Lake shows him and everyone else that she isn't fragile at all. I want her to have the happily-ever-after she deserves and now the waiting game begins for book three. 4.5 stars for Somebody Else's Sky. ♥

Read my reviews for the Something in the Way series:

Something in the Way (book one) - five stars - My Review

Purchase Somebody Else's Sky on Amazon.