Review: His Convenient Husband by Robin Covington (Love and Sports #1) 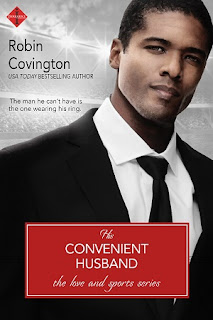 What was it about Victor that spoke to him, that pulled him into his orbit and refused to let him go? He danced like he lived, as if he wasn't going to waste a moment of feeling everything, doing everything, throwing his entire being into the task of really living. It was captivating, confusing, because this mercurial, loud, brash man was nothing the one he'd love and married all those years ago.

I may not have read every single one of Robin Covington's books, but I'm preeetty sure she's never written a full-length M/M novel before, what more an M/M series. (If I'm wrong on this, please drop me a note via the comments at the end of this review.) After having read her Love and Sports series starter, you wouldn't think this was her first. If anything, she doesn't have her foot merely through the proverbial door of the genre; she's walked in and made herself comfortable in it, and readers and fans of either her writing or the sub-genre in general would be fools to skip her first foray. The romance and heat that Covington is known for is very much present, but His Convenient Husband certainly didn't feel like her usual love story, with the author merely swapping her usual female main character for a male one. Nope, she's whipped up something that's very much M/M, Covington style.

This book employed the fake relationship trope, with NFL receiver Isaiah Blackwell offering to marry male ballet dancer Victor Aleksandrov after the latter's petition for political asylum is denied. While Isaiah's sexuality is not a secret, he doesn't necessarily flaunt it. People know that he's a widower and single father to a teenage son, but his quiet nature has him reticent when it comes to sharing details about his life along with any thoughts and feelings he may have regarding hot-button topics. On the other hand, Victor refuses to remain silent, publicly speaking up when asked about the treatment of gays in his home country of Russia, basically putting his own life in danger. There's mutual attraction between the two but their marriage is one of convenience...only it starts to feel like far more the longer they're together. With Isaiah's heart still belonging to his late husband and a his firmly entrenched home life with those closest to him, does Victor even have a chance to become a true part of the Blackwell family?

His Convenient Husband isn't your typical sports romance. It's light on the sports--in this case, professional American football--in terms of the actual action on the field, but what it may "lack" there is more than made up for with the author's highlighting of of Isaiah's team's support coming with caveats. It's almost like saying they're all for him being openly gay for as long as Isaiah--and by extension, Victor--doesn't bring "unwanted" attention to themselves. Of course, aside from sports politics, the very real issue in Russia was spotlighted, and I think it provides a good talking point for people and it brings awareness to the fact that as much prejudice still exists in your country, it's far worse for those who live in far more oppressive nations. With those two layers of complexity along with the situation about Isaiah making space in his life and heart for Victor made for a compelling read, one that had my attention and then captured my heart. Fair warning to the author though: my expectations are now rather high for the rest of the Love and Sports series, but I have faith. Five-plus stars go to His Convenient Husband. ♥