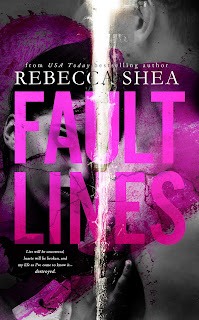 Fault Lines is the newest contemporary romance from bestselling author Rebecca Shea, and it's a second-chance romance between thirty-two-year-old car restorer Cole Ryan and twenty-nine-year-old prosecutor Frances Callaway. Frankie always knew her future was with Cole, but a betrayal led Frankie to leave their hometown of Crescent Ridge behind and set off on a path Cole always believed she belonged on. A decade later, Frankie finds herself back home due to her mother's stroke. She knows she can't avoid Cole while she's at the Ridge, not when he seems to be in closer proximity than she ever expected. And all he asks for is some of her time--to explain what happened ten years ago. But what would be the point? Frankie has the career she's always wanted and she's engaged to a fellow lawyer. What could Cole possibly reveal to her now that may change her mind about him and what he did to her? His secret may end up leaving her with even bigger cracks in the heart that has never really fully recovered, but her secret could be the irrevocable breaking point that forces their fault lines shattering them.

I've enjoyed my past reading experiences with the author's previous work, and her latest release hasn't changed that in the least. There's a fair amount of angst courtesy of the tumultuous manner in which the main characters' relationship ended. Still, I wouldn't necessarily call this a heavy read--not that it's a lighthearted one either--mainly because there isn't a whole lot of character-driven drama. Neither Cole nor Frankie go off the deep end or do anything that's cringe-worthy, at least as far as I'm concerned. They have their issues and it stems from the kind of love that has them self-sacrificing. You'll get it when you read the book, and yes, that means I won't be divulging what it is that triggered the break-up and what it is that could potentially break them yet again. Overall, I enjoyed the book, though, this did have a rather well-worn story line to begin with (her secret was any easy one to guess) and I did find it strange that Frankie's fiancé behaved the way he did without much prelude. Cole's best friend, Carter Richardson, was a standout peripheral character, and I hope we get his story soon. 4.5 stars for Fault Lines. ♥