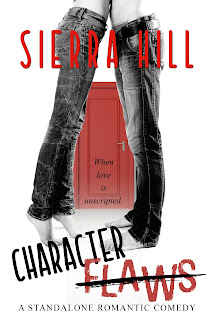 Character Flaws is a standalone romantic comedy and my first read by Sierra Hill. The synopsis for this book had me thinking that the main characters--twenty-four-year-old high school teacher Josephine Hughes and twenty-six-year-old stage actor and aspiring playwright Theodore Crawford, better known as Joey and Theo, respectively--weren't on the best of terms, but it turns out that wasn't even that big of a deal in terms of the story. Basically, Joey has a gay neighbor, Patrick Donaldson, whom she's good friends with. When Theo, a friend of Pat's, dog-sits for the two months Pat will be overseas, Joey strikes up her own friendship with him, even though he didn't exactly leave her with a great first impression (hello, hangover). Things are easy and relaxed between the two of them, but Joey develops feelings for Theo--very non-platonic feelings. It's a recipe for heartbreak because who the heck would not just crush on but actually start falling for their totally hot gay friend? Only, who ever said Theo was gay?

This rom-com had a lot of potential. I liked the idea of Joey assuming that Theo was gay and then developing feelings for him was fodder for rom-com gold. While Theo and Joey were likable characters, there were just moments where that much needed chemistry between the two of them faltered, at times feeling somewhat forced. Same goes for the comedic fare. Then there was Theo's reaction to seeing his ex again. Hello? What the hell was that? It was as if it came out of nowhere. He could have also put a complete stop to the flirting of one of his co-stars in the play he was staging and acting in, but nope. Sorry, but both those instances had me thinking he didn't have that much of a backbone, and that doesn't exactly win him any points in the book boyfriend department. There was also a disconnect between certain scenes. Still, in terms of entertainment value, this book was okay and it did inspire a smile or two from me. Mr. Woodcock, aka Woody, was a hit and I wish he had more face time in the book, same with Patrick. Character Flaws wasn't bad but it was flawed in places and gets 3.5 stars. ♥