Release Blitz: The Highlander Is All That by Sabrina York (Untamed Highlanders #3.5) 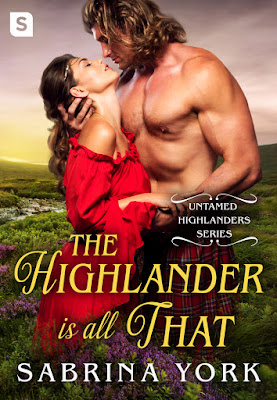 The Highlander Is All That
(Untamed Highlanders #3.5)
by Sabrina York
Release Date: October 10, 2017
SMP Swerve

About The Highlander Is All That
Elizabeth St. Claire has always been hard to please. Dreaming solely of Highlander men her whole life, no prancing London Lord can stand a chance at winning her heart...

… But perhaps a Scotsman can.

Elizabeth watches intrigued as the Highlander of her dreams, a Scotsman named Hamish Robb, arrives to oversee her season at the behest of her cousin, the Duke of Caithness. Elizabeth doesn’t hide her feelings for the striking Scot. But Hamish, determined to obey his order to protect the St. Claire sisters, steadfastly rejects her every seducing lure.

Believing that the debutante Elizabeth deserves a better, wealthier man, Hamish continues to turn away from her affection, even though he doesn’t exactly want to. Can this Highlander Scot resist the tempting seductress’ attempts to win his heart?

Add The Highlander Is All That on Goodreads.

An Excerpt from The Highlander Is All That
Ach. This was going to be difficult, Hamish thought as the disgruntled butler and young footman—who carried their bags—led them up the sprawling staircase to their rooms, which, for some reason, were at the far end of the east wing, a portion of the mansion that was apparently very rarely used.

And by difficult, he did not refer to the mission the duke had given them. Not even to an unwanted visit to London.

He hadn’t expected to be this attracted to one of his charges, and it had hit him like an anvil.

It had been all he could do to maintain a placid demeanor. To not stare.

But damn, she was beautiful.

They all were, the St. Claire sisters. Anne was tall and willowy with serene brown eyes, and Victoria sparkled like a diamond. Even wee Mary was a beauty.

She took his breath away.

Small and elegant with a spritely smile and bouncing black curls, she was the most beautiful woman he’d ever laid eyes on.

It was a damn shame he was here to help find her a husband.

It was a damn shame she was the duke’s cousin.

It was a damn shame he wasn’t rich.

He had nothing to offer a girl like her. He had no business even thinking about her like that.

But damn, she was beautiful.

“Well, what do you think?” Ranald asked after the butler had unceremoniously shown them to their rooms. They stood by his window and stared out at the gray London sky.

“How long do you think it will be before we can go back home?”

Hamish made a face. “The season is three months.”

“But if we get them all married off, our work is done. I say, having had a look at them, it shouldna take long.” He fingered the hem of the curtain. “That one is quite a stunner.”

Something in Hamish’s gut clenched. He had nothing to offer Elizabeth, but Ranald did. His friend had a title and the majority share in the business they ran with some of their friends. While the duke might balk at having Hamish wed his cousin, Ranald would be welcomed with open arms.

The thought made him want to pummel something.

“They’re all lovely,” he grumbled.

“Aye. But Anne is exquisite.”

Relief gushed through him. He had no idea why. “Och. Aye. That she is.”

“Of course, they are all verra lovely.”

“We’ll probably have to be beating off suitors with a bat.”

They grinned at each other. Whacking Englishmen was always a pleasant proposition.