Review: My Fake Fiancé by Piper Rayne (The Greene Family #8) 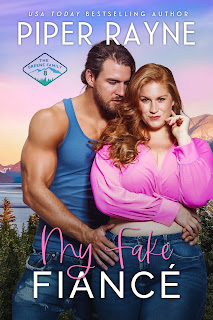 Note: An advance reader copy (ARC) was provided by the authors via Valentine PR.
I've been quite curious about Amanda Greene's story ever since the airport scene in A Greene Family Vacation. And then there was that cliffhanger in the previous full-length novel, My Scorned Best Friend. Now, the writing duo of Piper Rayne have Mandi's book out in the wild, and this seemingly good girl looks to have a bit of a rule-breaking streak. While new readers could probably try jumping into this without having read any of the other books, I will say that because the Green Family series features one clan, there are a lot of recurring characters, so I'm going to highly recommend reading the books in order.
As you can tell from the title, My Fake Fiancé is a fake engagement romance, and Mandi shares the spotlight with Noah Winters. For anyone new to the Greene Family series, Mandi is thirty, owns SunBay Inn, and lives in Sunrise Bay, Alaska. Noah, on the other hand, is in his late twenties--I'm guessing about twenty-seven or twenty-eight based on the information in the book, but he could be a year or two older than that--works as photographer for National Geographic, and is originally from Greywall, Alaska. He's been a regular guest at SunBay Inn over the past few years and struck a friendship with Mandi, one that belies the mutual attraction between them. But when he asks her to pretend to be his fiancée in hopes of repairing a family rift, it's not merely a friend asking for a favor. Mandi's never been interested in becoming any man's one-night stand, but being Noah's fake fiancée may very well result in the all-too real risk of losing her heart.
I quite liked the fact that Mandi was a plus-sized female main character. Compared to most of her other siblings, she's a bit more on the quiet side, choosing to be discerning and cautious. Her agreeing to Noah's plan to pretend to be engaged was something that was out of character for her, and while I'm not a huge fan of the fake anything trope, I did like how Piper and Rayne resolved matters once the main characters realized that what was happening between them was no longer as fake as they once thought. The story was paced well and I enjoyed all the family bonding. Special mention definitely goes to the meddlesome yet well-meaning, matchmaking grandmas! Four stars go to My Fake Fiancé!
-------------------------
Read my reviews for the Greene Family series: