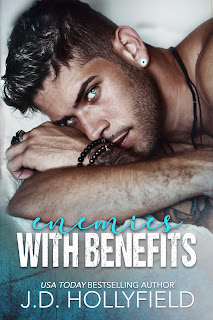 Note: An advance reader copy (ARC) was provided by the author via Wildfire Marketing.
Enemies with Benefits is the latest release from bestselling author J.D. Hollyfield. While this is a standalone, it does share ties with two other books penned by Hollyfield--Chicks, Man and Worth the Chase--and the main characters from there plus one recurring peripheral character make up the group of four best friends featured in all three books. While you could read all the aforementioned titles irrespective of each other, I honestly think that reading them in order will provide a more fun-filled, well-rounded experience.
When Ben Wallace spots the beautiful woman during his best friend's wedding reception, he doesn't hesitate flirting with her. While her initial reaction to him was less than welcoming, she seems to warm up to him, and off they go to what looks to be a promising hook-up. But then she leaves him high and dry and very much humiliated. It turns out that the woman is none other than Makayla Fischer nee Jacobs, the girl he spent years teasing--tormenting, if you ask Mak--while they were growing up. She may not be his biggest fan, but Ben's pretty sure she wants him as much as he wants her. After all, the line between love and hate is a thin one, but this thing had nothing to do with love. Right?
This book absolutely exceeded every single one of my expectations! From the wit and humor to the romance and steam, I was hooked on everything that was going on between Ben and Mak. And there was even a bit of mystery and suspense and a dash of angst to boot! The banter was strong with these two, and each encounter they had was simmering with tension--the good, delicious kind, of course. The mystery part of the story was subtle over several chapters, but once it became clear something nefarious was afoot, the intrigue factor ramped up. Having the other couples--Levi and Hannah, Kip and Stacey, and Chase and Bridget--around made Enemies with Benefits even more entertaining, and it snags five stars. I'm going to miss these guys, but what an impression they've all made!
Date Read: 28 August 2022
Learn more about J.D. Hollyfield.
Purchase Enemies with Benefits on Amazon | Apple Books | B&N | Kobo.