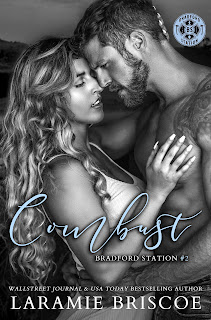 Note: An advance reader copy (ARC) was provided by the author via Grey's Promotions.
Combust is the second book in the Bradford Station series from Laramie Briscoe. Cameron Hines is a firefighter with the rank of lieutenant with Bradford Station Company One and is a single father to his six-year-old daughter, Trinity. Natalie Grimes is twenty-four and has been Trinity's nanny since the little girl was three and right after Cam's then-wife handed him divorce papers. Natalie also happens to be the younger sister of Cam's best friend and fellow firefighter, Gauge. When Cam and Nat give in to their mutual attraction, the decision is made to keep it under wraps, fearing Gauge won't be all that accepting of his best friend and younger sister becoming a couple. They can only keep what's happening between them a secret for so long, and when it all comes out, could it end up costing Cam his longtime friendship with Gauge or his new romance with Natalie?
I love me a single parent romance, and I've been waiting for the second book in the Bradford Station since the first book was released in January. I did like Cam and Nat as a couple, and the family that these two had created with Cam's daughter, Trin, was sweet. The whole drama with Gauge was exactly that--drama. I honestly thought his reaction upon learning what was going between his best friend and his sister was a wee bit over the top. I also wasn't sure why he needed a chapter told from his point-of-view, but hey, it is what it is. As for the author's writing, this book suffers from the same issues I had with the series starter. There were times when transitions from one scene to another or one chapter to the next came off as abrupt, almost as if you missed something in the process. So, inasmuch as I like the single parent trope, Combust faltered in its delivery. Three stars.
Release Date: 31 August 2022
Date Read: 29 August 2022
Learn more about Laramie Briscoe.
Purchase Combust on Amazon | Apple Books | B&N | Kobo.