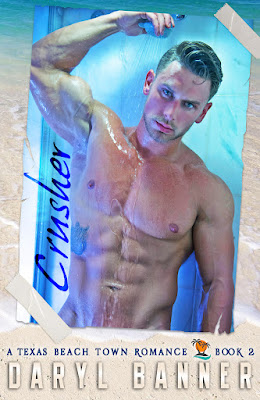 Crusher
(A Texas Beach Town Romance #2)
by Daryl Banner
Release Date: August 5, 2022
About Crusher
From USA Today bestselling author Daryl Banner comes a steamy beach town opposites-attract romance with a surprise ending that will steal your heart.
When Quintin Ruiz’s classmate invites him down to Dreamwood Isle for the weekend, the last thing he wanted was to capture the attention of the beach town’s infamous “Heart Crusher” Adrian Tyler.
Pretty boys with eight-pack abs aren’t Quintin’s type.
Meanwhile, Adrian Tyler is tired of only being seen as a “pretty muscle boy” with a bad reputation for having new arm candy every weekend.
Besides, what’s he supposed to do when every young and willing guy in sight throws themselves at him?
So when Adrian crashes into the sensitive art student named Quintin, who instantly puts him in the “friend zone” and wants nothing romantic to do with him, Adrian is left feeling relieved.
And also very, very confused.
What starts as a totally platonic friendship turns into something more as the young men get to know one another, share each other’s dreams ...
And ultimately give in to their suppressed desires.
✔️ Opposites attract
✔️ Beach town vacation vibes
✔️ Major steam 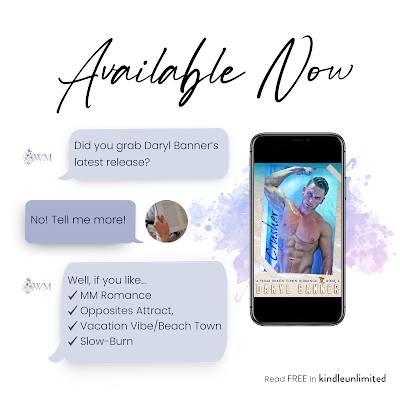 About Daryl Banner
Daryl Banner is an author and composer who graduated magna cum laude from the University of Houston Honors College with a degree in Theatre and Psychology. During his time in college, he wrote, composed, and produced a musical under Tony Award-winning musical and theatre producer Stuart Ostrow, as well as two original plays produced under the mentorship of Pulitzer Prize-winning playwright Lanford Wilson, who also mentored Daryl through the writing of his first novel.
In addition to new adult and M/M romance, Daryl writes post-apocalyptic fantasy and dystopian fiction. He is most inspired by the smart and unlikely hero, but urges you (the reader) not to fall in love with them; they may deceive you with their innocence.
Connect with Daryl
Website | Facebook | Twitter | Instagram | Goodreads | BookBub | Amazon