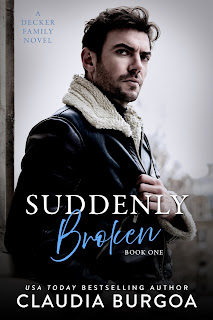 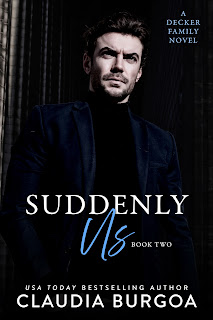 Note: Advanced reader copies (ARCs) were provided by the author.
My introduction to Claudia Burgoa's writing came by way of her Unexpected series back in 2015 and into 2016, and those books that comprised the aforementioned series remain among my all-time favorites. When she announced that she was going to rework the series, I confess that I was a wee bit wary. After all, I love the Decker clan as they were, and I had the whole "if it ain't broke, don't fix it" running in my head. But curiosity won out, and so I dove in, and can I just say that I've never been as glad as I was when I learned that both books in the new Unexpected Everlasting duet were to be published at the same time because I don't think I would have been able to stand any overly long wait.
Suddenly Broken is the first book in the duet, and it's followed up by the conclusion, Suddenly Us. If you're new to this author, this as good a duet to get a feel for her storytelling. If you're like me, and you're familiar with the original Unexpected series, particularly the second novel, Unsurprisingly Complicated, I suggest you go into this setting aside whatever it is you already know about Ainsley Janine Colthurst-Decker and Mason Ichiro Hiroshi Bradley. In short, think of this as a completely fresh read because if you assume this is the same story, well, you know what they say about those who assume.
At its most basic, the Unexpected Everlasting duet is a friends-to-lovers romance, but it's also so much more than that. This sets the foundation for already published spin-offs and crossovers from the author, creating a more cohesive and tightly bound together arc of sorts as far as a certain covert group is concerned. Then there are the Deckers... I swear, there's just something about this family that has them continuing to be as endearing and intriguing as they were when they were originally introduced. I'm eager to see how the new versions of their stories will play out. And let's not forget Ainsley and Mason. These two had a friendship that was always meant to be more. They were put through the wringer, and their happily-ever-after was well-earned. Lest it needs to be said: Suddenly Broken MUST be read prior to Suddenly Us. Four stars for the Unexpected Everlasting duet.
Release Date: 25 August 2022
Dates Read: 20-21 August 2022
Learn more about Claudia Burgoa.
Purchase the Unexpected Everlasting duet on Amazon.