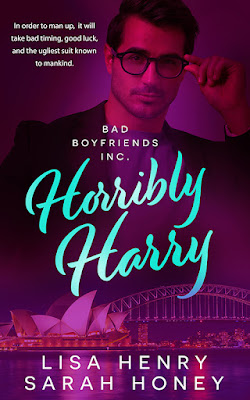 Horribly Harry
(Bad Boyfriends Inc. #2)
by Lisa Henry & Sarah Honey
Date Released: August 9, 2022
Pride Publishing
About Horribly Harry
Bad Boyfriend, Inc—When you can’t find a good boyfriend, why not hire a bad one instead?
To supplement his income while he’s completing his Early Education degree, Harry Townsend hires himself out as a terrible date—for a set fee, he’ll horrify parents and family members in all sorts of interesting ways. But when it comes to actual relationships—and sex—Harry doesn’t get the appeal. He doesn’t get the same tingly feelings everyone else seems to when they meet someone attractive, and he’s fine with that. He’d rather spend his evenings watching TV anyway.
Jack Windsor abandoned his uni degree to do an apprenticeship as a mechanic, much to his parents’ dismay. He’s happy with his choices, but leaving uni meant losing his accommodation, and now he’s crashing on his sister Mia’s couch. It isn’t ideal, but it’s only until he finds something else—which is proving difficult in Sydney’s brutal rental market.
When Jack almost kills Harry with a strawberry smoothie, he discovers that not only was Harry’s disastrous date with Mia a set up, but that Harry is looking for a roommate. Moving in with Harry is great, if only he wasn’t so distractingly cute—and totally uninterested in Jack. Except as they grow closer as friends, for the first time in his life, Harry tells Jack he’s developing feelings for him—tingly ones.
But how can Harry and Jack be together when Jack’s family thinks that Harry is the worst human being in the universe? And how can Jack convince them that his Bad Boyfriend is the best boyfriend he’s ever had, without admitting that Mia hired him to be terrible to them? When an approaching family event brings everything to a head, Jack’s going to have to step up to prove to Harry that he wants him in his life. And it might just take some bad timing, some good luck and the ugliest suit known to mankind. 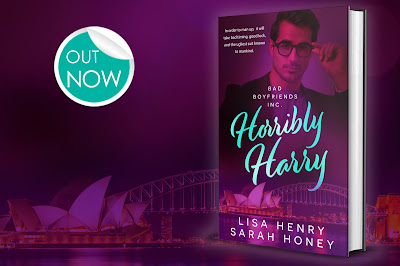 Sarah Honey started life in New Zealand. She came to Australia for a working holiday, loved it, and never left. She lives in Western Australia with her partner, two cats, two dogs and a life-size replica TARDIS.
She spends half her time at a day job and the rest of her time reading and writing about clueless men falling in love.
Her proudest achievements include having adult kids who will still be seen with her in public, the ability to make a decent sourdough loaf, and knowing all the words to “Bohemian Rhapsody”.
Horribly Harry will be her sixth published novel in collaboration with Lisa Henry.
Connect with Lisa
Website | Blog | Facebook | Twitter | Instagram | Goodreads | BookBub | Newsletter
Connect with Sarah
Facebook | Twitter | Goodreads